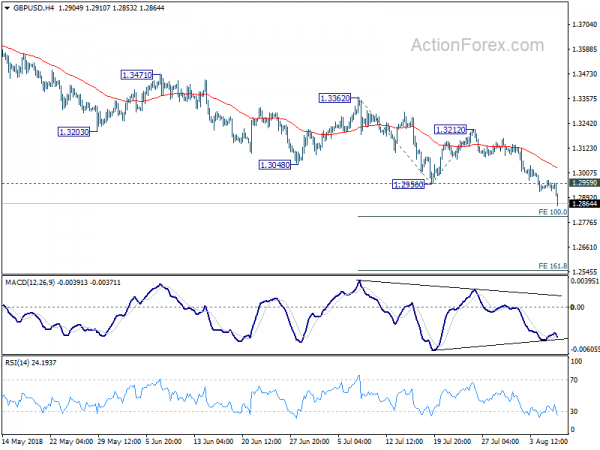 Sterling plunges sharply today as markets are seeing increasing change of a no-deal Brexit. Adding that, GBP/USD’s break of 1.2956 earlier this week and EUR/GBP’s break of 0.8957 resistance yesterday also adds to broad based pressure on the Pound. Australian Dollar follows as the second weakest at this point. Market sentiments were weighed down generally by escalation in US-China trade war. Following US announcement of the effective date on 25% tariffs on Chinese imports, China MOFCOM announced retaliation data in parallel. Yen is so far trading as the strongest one, followed by Dollar which usually benefits from trade war. Euro pares some of this week’s gain but remains resilient.

In other markets, sentiments are mixed only, not too day. FTSE is trading up 0.74% at the time of writing, once again thanks to Pound’s depreciation. DAX is reversing earlier loss and is up 0.16%. CAC is down -0.1%. Earlier in Asia, China Shanghai SSE lost -1.27%. But Hong Kong HSI gained 0.39%. Nikkei closed down -0.08% while Singapore Strait Times lost -0.4%. WTI crude oil is back below 69 as recent sideway trading continues. There is no strength whatsoever for regaining 70 handle. Gold is hovering around 1210 as sideway trading extends. It’s just a matter of time for Gold to break through 1200 decisively.

Now, it seems a no-deal Brexit is an acceptable fact. It started last week when BoE Governor Mark Carney said risk of no-deal Brexit is “uncomfortably high”. Then Trade Minister Liam Fox assigned a 60-40 chance of it. Scotland’s First Minister Nicola Sturgeon also jumps in, blasting Prime Minister Theresa May’s handling of Brexit negotiation. Sturgeon said that “with every day that passes, the prospect of a no deal Brexit or a Brexit with very, very little information about the future relationship seems to become more and more likely.” She added that “both of those outcomes would be completely unacceptable, absolutely disastrous for our economy, so I hope she (Theresa May) can reassure me that neither of those things are going to happen.” “But if she can’t, then I hope she will outline her plan B, because we cannot simply take a step off that Brexit cliff-edge next March without knowing what comes next.”

At the same time, the article said that ECB’s accommodative monetary policy has “contributed considerably to the expansion of private cons