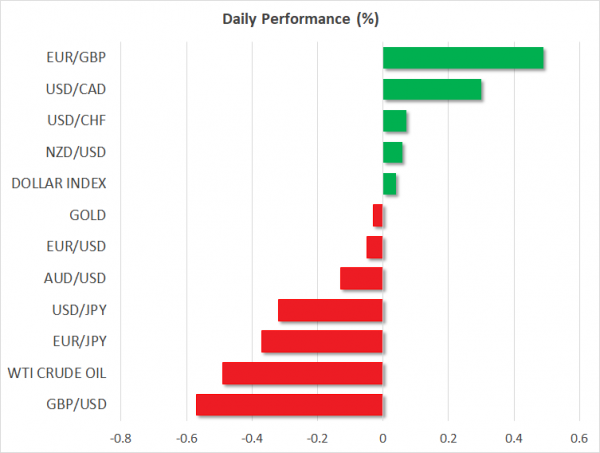 FOREX: The US dollar weakened by 0.27% versus the Japanese yen on Wednesday, with dollar/yen trading near 111.00, while the US dollar index, which gauges the greenback’s strength against a basket of six major currencies, held near its opening level. Euro/dollar returned to 1.1600 (+0.03%) after reaching an intraday high of 1.1628, while euro/yen dived by 0.38%. Moving to the UK, a no-deal Brexit scenario has been growing in investors’ minds, as less than eight months remain for the UK to leave the EU, and there are still no signs of an agreement. Brexit fears escalated further after the BoE chief, Mark Carney, said that chances for such an occasion are “uncomfortably high” and Britain’s international trade secretary, Liam Fox, supported on Sunday, that a failure to reach an agreement is more likely than reaching one, sending pound/dollar to a new almost 1-year low of 1.2892 (-0.24%) today.The pound’s weakness helped euro/pound to climb to a new 8-month high of 0.8991 (+0.22%). The antipodean currencies were trading mixed, with aussie/dollar being down by 0.15% and kiwi/dollar up by 0.10%. Dollar/loonie added 0.25% to its performance, hitting a fresh 1-week high at 1.3085.

STOCKS: European equities traded mixed on Wednesday morning, as investors turned their focus on corporate earnings and trade tensions. The pan-European STOXX 600 and the blue-chip Euro STOXX 50 declined marginally by 0.04% and 0.07% respectively at 1030 GMT, with pharmaceuticals driving the losses after earnings results in the industry disappointed. The German DAX 30 was steady, the French CAC 40 moved slightly up by 0.04%, while the Spanish IBEX 35 was down by 0.17%. However,the UK’s FTSE saw an advance of 0.87% on the back of a weaker pound, while the Italian FTSE MIB rose by 0.37%.

COMMODITIES: Oil prices were trading lower, with WTI crude falling to $68.78/barrel (-0.64%) and Brent retreating to $74.26 (-0.52%). While US sanctions against Iran were threatening oil activities in the region, China’s foreign minister said on Wednesday that business ties with Iran are “open and transparent”, likely tempering the bullish sentiment.Recall that Iran refused the US offer for talks, claiming that it could not enter negotiations under renewed sanctions from Washington. Earlier data showed that China’s crude oil imports had rebounded in July but remained the third lowest this year. Gold was flat at $1,210.5 an ounce.

Day ahead: RBNZ announces its rate decision; Trade continue to linger in the background

Wednesday will be quiet in terms of data releases, with the focus turning to New Zealand late in the day, where the Reserve Bank will conclude its policy meeting at 2100 GMT. Analysts are widely expecting policymakers to keep interest rates unchanged at a record low of 1.75%. Recall that at the latest meeting, the central bank signaled that borrowing costs could move both up or down, if necessary. While today a survey showed that RBNZ inflation projections for the next year have increased to an average of 1.86% from 1.8% seen previously and 2-year expectations have risen slightly to 2.04%, policymakers could opt to hold stimulus in place for now amid an uncertain global trade environment. A slowdown in GDP growth in the first quarter could also cause policymakers to refrain from raising rates. Should the central bank put more weight on downside risks, including a potential deterioration in trade conditions due to the US’s rising protectionist appetite, a fact that could dampen hopes for a rate hike in the future, the kiwi could lose ground against the greenback. A press conference is scheduled to follow the rate announcement.

Meanwhile in the US, Trump’s administration continues to pressure China, saying late on Tuesday that it is planning to activate a 25% import tariff on an additional $16 billion Chinese goods in two weeks. But earlier today stats out of China indicated that US import tariffs did not restrict trade activities in July, with both exp