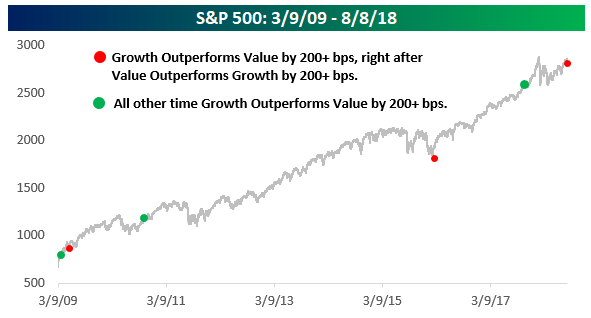 Growth stocks have rebounded nicely after a steep three-day decline relative to value shares and this could lead to more gains in the broader stock market, according to data from Bespoke Investment Group.

The S&P 500 Growth index is up 2.96 percent since July 31 through Wednesday’s close, compared with a gain of 0.75 percent for the S&P 500 Value index, Bespoke’s data show. Growth stocks are expected to gain at a faster rate than the overall market while value stocks are priced lower relative to their company fundamentals.

“It’s hard to believe that it was only a little more than a week ago that the rally in growth stocks was being eulogized, but to paraphrase Mark Twain, reports of the death of the growth trade may have been greatly exaggerated,” Paul Hickey, co-founder of Bespoke Investment Group, said in a note Wednesday. “Growth has retraced just about half of the ground it lost during the three-day swoon of late July.”

The sharp move down in growth sparked talk about a potential comeback for value stocks, which have largely underperformed during this bull market.

Growth stocks are up more than 360 percent since March 2009, when the current bull market started. Meanwhile, value shares are up just more than 265 percent in that time period. A large part of that outperformance in growth has been driven by a more than 500 percent gain in tech stocks, as Apple and Alphabet have skyrocketed more than 1,600 percent and 719 percent, respectively.

But this underperformance was then followed up by a three-day period when growth outpaced value by more than 2 percentage points, something that has only happened two other times in this bull market. According to Bespoke, the broader S&P 500 could be in store for more gains after this.

“Looking at the S&P 500’s performance following each of these prior periods shows that they were followed by further market gains,” Hickey said.