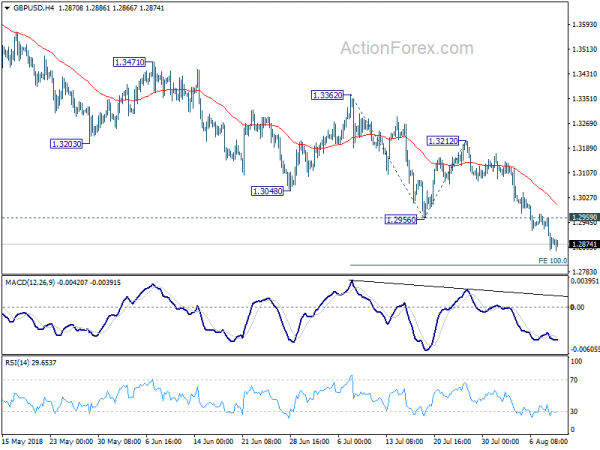 New Zealand Dollar is clearly the biggest loser today after more dovish than expected RBNZ rate decision. Sterling is following as the second weakest, continues to be weighed down by no-deal Brexit worries. On the other hand, Canadian Dollar is staging a strong rebound as markets look pass the tensions with Saudi Arabia. Australian Dollar follows as the second strongest as boosted by the strong rebound in Chinese stocks. For the week as a whole so far, Australian Dollar is the strongest one, New Zealand Dollar and Sterling are the weakest ones.

Technically, Sterling remains in clear down trend against Dollar, Euro, Yen and Swiss Franc. But oversold condition could start to limit downside potential. While Euro recovered this week, there is no follow through buying against Dollar. Similarly, even AUD/USD also lacks decisive up side momentum. A focus will be on whether these two pairs will head back towards recent range bottom at 1.1507 and 0.7309. USD/CAD spiked higher to 1.3066 but quickly retreated deeply back to 1.3000. For now, we’re still favoring that recent correction from 1.3385 has completed at 1.2961. Thus, we’re anticipating another strong rally in USD/CAD soon.

RBNZ’s announcement comes in more dovish than anticipated. While leaving the Official Cash Rate (OCR) unchanged at 1.75%, the members pushed backward expectations for the next interest rate adjustment. OCR is expected to be kept low, “but for longer”, through 2019 and into 2020. RBNZ also reiterated that the next move “could be up or down”.

77% economists expect no BoJ stimulus exit until 2020 or later

According to a Reuters poll, 73% of economists surveyed expected that BoJ will not start unwinding stimulus until 2020 or later. That’s nearly double of 37% last month. Around one third said BoJ’s July announcement as a small step on crafting the exit strategy. BoJ explicitly talked about allowing 10 year JGB yield to move between -0.1% and 0.1%. 77% of economists believed that would help bond market functioning.

On the economy, economists projected core CPI, excluding sales tax hike impact, to rise 0.9% in the fiscal year to March 2019, same as the prior fiscal year. That’ notably lower than BoJ’s own forecasts of 1.1% in fiscal 2019 and fiscal 2019. Economists also saw Japan GDP to grow 1.1% this fiscal year and then slow to 0.8% next.

Chinese stocks are enjoying a strong rally today. The Shanghai SSE breaches 2800 handle and is holding 2% gain. Tech stocks led the way higher as the government indicated strong focus in development in the sector. Yesterday, the State Council renewed the ” National Science, Technology and Education Leading Group” to “National Science and Technology Leading Group”, showing the dedication in science and technology.

The group is headed by Premier Li Keqiang with Vice-Premier Liu He as deputy. Fourteen high level officials from National Development and Reform Commission, the Ministry of Education, and the Ministry of Science and Technology are also part of the group.

Selling pressure on Canadian appears to have eased after Canadian Prime Minister Justin Trudeau tried to tone down the tension with Saudi Arabia. Trudeau referred to recent events as a matter of “diplomatic difference of opinion” only. And he emphasized that “we don’t want to have poor relations with Saudi Arabia.” Trudeau went further and hailed that Saudi Arabia is a “country that has great significance in the world, that is making progress in the area of human rights.”