UK GDP Next on the Horizon for the Battered Pound 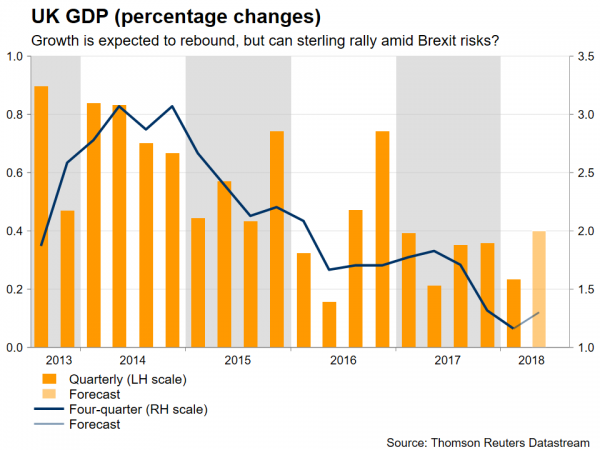 The UK preliminary GDP data for Q2 are due out on Friday, at 0830 GMT. Projections point to an acceleration in growth, which would be in line with the BoE’s latest forecasts. While a strong print could help the battered pound recover a little on the news, any sustained rally in the currency remains unlikely given the heightened uncertainty currently surrounding the Brexit negotiations.

In the quarter ending in June, UK GDP is expected to have risen by 0.4% in quarterly terms, an acceleration from a lackluster 0.2% previously. Besides the headline GDP figure, the UK will also release preliminary numbers on business investment Q2, as well as industrial production and trade balance data for June. Most attention could fall on investment, which is expected to have risen by 0.3% on a quarterly basis, after falling by 0.4% in Q1. This number is closely watched as a gauge of whether Brexit uncertainties are beginning to filter into the real economy, by keeping businesses cautious to invest.

The forecast for a 0.4% quarter-on-quarter GDP print is supported by the nation’s Markit services PMI for June, where the firm’s chief business economist noted: “the survey data indicate that the economy likely grew by 0.4% in the second quarter”. Separately, the NIESR monthly GDP tracker – a model for forecasting UK GDP – also estimates Q2 growth at the same pace.

While a strong number could confirm the UK economy remains solid and hence support the pound somewhat on the news, one remains skeptical of envisioning any sustained rally in the currency, for now. The BoE clearly signaled last week it is in no hurry to raise interest rates again. Markets understood the message and correspondingly, pushed back the anticipated timing of the next 25bps rate increase to November 2019, according to UK OIS.

Meanwhile, the EU-UK negotiations are at a very uncertain juncture. The EU implicitly rejected key parts of the UK’s latest Brexit plan recently, and speculation for a no-deal Brexit is picking up steam. While it’s true that the pound could explode higher on any signs of an agreement, we are not quite there yet, and it remains doubtful whether progress can be achieved at a pace quick enough to allow for a smooth exit by March next year. Therefore, the uncertain outlook for politics could continue to limit any potential data-driven rallies in the pound, at least until – and if – a Brexit deal is seen as being near its conclusion.

Taking a technical look at sterling/dollar, immediate support to declines may be found near the 11-month low of 1.2840, recorded on August 9. A downside break may open the way for the 1.2770 territory, defined by the lows of 24 August 2017, before the attention turns to the 1.2690 handle, marked by the inside swing low of 15 June 2017.

On the flipside, in case of advances, preliminary resistance may come around the August 6 low, at 1.2920. Even higher, the bulls could stall near the 1.3080 zone, identified by the swing low of July 27. Thereafter, the focus would increasingly turn to the 1.3215 hurdle, defined by the peaks of July 26.