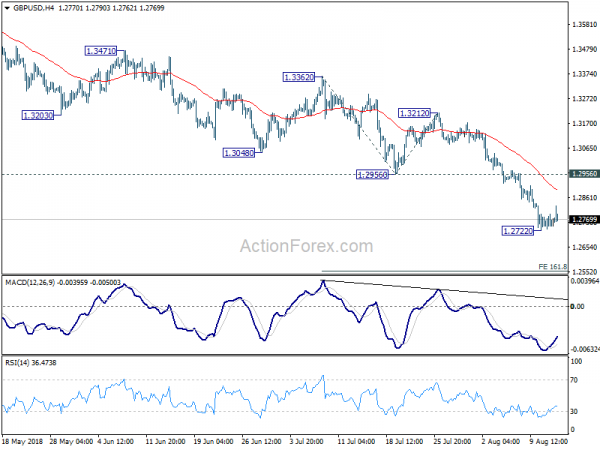 Some important economic data were released during the European session. But they provide little lift to Euro and Sterling. In particular, even though UK unemployment rate dropped to 43 year low, deceleration wage growth gives no pressure to BoE to hike again soon. German economic sentiment improved but still pointed to less favorable outlook ahead. Australian Dollar and Yen are trading as the weakest ones. Aussie is weighed down mildly by weak Chinese data. Yen is digesting the steep rally since late last week. Canadian Dollar is trading as the strongest one, followed by Kiwi.

Technically, while USD/JPY recovers further today, it’s still limited below 111.17 minor resistance. Thus, there is no indicate of a near term bullish reversal yet. Further than that, deep selloff is seen in USD/CAD and USD/CHF. Focus will now be on 111.17 resistance in USD/JPY, 0.9894 support in USD/CHF and 1.3035 support in USD/CAD. Break of the latter two levels could weigh down the greenback slightly.

UK Foreign Minister Jeremy Hunt told reports in Helsinki that the risk of no-deal Brexit has been “increasing recently”. But he emphasized that it’s not what anyone wants and I hope very much that we’ll find a way to avoid that”. He urged that “everyone needs to prepare for the possibility of a chaotic no-deal Brexit”. He also called for “a change in approach by the European Commission”.

Hunt is on a three-day European tour. He will meet Foreign Ministers of Finland, Latvia, Denmark and the Netherlands. In a quote released by the Foreign Office, Hunt said “we want to safeguard our operational capacity as we leave the EU, and so we have put forward precise, credible proposals that ensure our ability to act is maintained.” And, “we are now at the point where the EU also faces strategic choices: with the option to move the negotiations forward and achieve a deal that works in our mutual interests. My simple message is that we need to take that opportunity.”

ZEW President Professor Achim Wambach said in the statement that “the recent agreement in the trade dispute between the EU and the United States has led to a considerable rise in expectations for Germany and also, to a lesser degree, for the Eurozone. However, the economic outlook for Germany is now significantly less favourable than it was six months ago.”

Australia NAB business conditions dropped -2pts to 14 in July. Business confidence rose 1pt to 7. Alan Oster, NAB Group Chief Economist noted in the release that the business conditions index “has now fallen considerably since April”. But business conditions remain “above average”, suggesting “favourable conditions have continued to persist through the middle of 2018”. The weakness in profitability and trading conditions was partially offset by improvement in employment.

Overall, the survey results were broadly in line with NAB’s outlook. Business sector looks “relatively healthy”. Growth in employment will reduce spare capacity gradually. And that should bring in a “rise in wage and a more general lift in inflation”. However, trends in forward indicators will be watched, which may be signaling slowdown.

Weaker than expected data show further cool down in China

In particular, fixed asset investment growth was the slowest on record since early 1996. That suggested weakening business confidence that could be hurt by rising trade tensions with the US, as well as China’s own deleveraging policy. Weak retail sales highlights the difficulty of shift focus to domestic consumption for growth momentum, in case of a full-blown trade war.

In the bigger picture, whole medium term rebound from 1.1946 (2016 low) should have completed at 1.4376 already, after rejection from 55 month EMA (now at 1.4141). Current downside acceleration argues that it’s possibly resuming long term down trend. In any case, outlook will stay bearish as long as 1.3212 resistance holds. Retest of 1.1946 should be seen next.