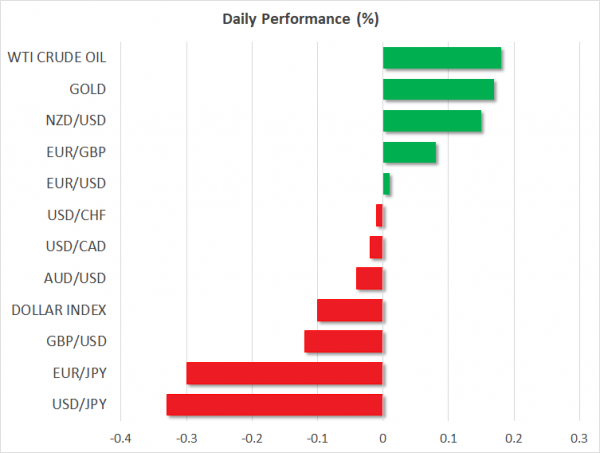 FOREX: The dollar index – which gauges the greenback’s strength against six major currencies – remained negative (-0.10%), though it pared most of its earlier losses, aided by a return of risk-off tones in markets. Dollar/yen moved down by 0.33% and held below the bearish cross of the 20- and 40-day simple moving averages (SMAs). In the euro area, the annual inflation rate was confirmed at 2.1% in July, above June’s 2.0%. Euro/dollar rose by 0.04% today, but held below the intraday high of 1.1419, giving back most of its gains from earlier in the session as attention diverted back to the situation in Turkey. Pound/dollar is set to post the sixth red week in a row and on Friday, it stood near the 14-month low of 1.2660 (-0.10%) hit earlier in the week. In the antipodean sphere, aussie/dollar dropped by 0.03% at 0.7258, while kiwi/dollar climbed by 0.17% at 0.6592. Dollar/loonie was steady near its opening level of 1.3154. Meanwhile, dollar/lira surged by 5.00% at 6.1100.

STOCKS: European equities were negative on Friday as the market remained cautious about the situation in Turkey, with the Turkish lira sliding again during the European session. The pan-European STOXX 600 and the blue-chip Euro STOXX 50 were down by 0.28% and 0.31% respectively. The German DAX 30 dropped by 0.33%, the French CAC 40 fell by 0.18%, while the Italian FTSE MIB plummeted by 1.03%. UK’s FTSE 100 dropped by 0.19%. In the US, futures tracking the major stock indices (Dow Jones, S&P 500, Nasdaq 100) were pointing to a negative open.

COMMODITIES: Oil prices headed higher today, supported by optimism that the US-China trade dispute may deescalate moving forward, hence brightening the outlook for oil demand. West Texas Intermediate (WTI) crude oil has moved higher since yesterday after the rebound from the almost 2-month low of $64.54 (+0.12%) per barrel. Also, Brent advanced by 0.31% and is approaching the $72.00/barrel handle. In precious metals, gold prices edged higher by 0.18% after posting a doji candle yesterday, reaching a 20-month low of $1,159.96.

The main data release on Friday will be inflation figures out of Canada. The University of Michigan (U of M) survey gauging US consumer confidence may also attract some attention. Beyond economic data, any remarks on Brexit from the relevant negotiators will be closely eyed, as will any developments in the US-China trade standoff and the Turkish saga.

At 1230 GMT, Canadian inflation numbers for July will be in the spotlight. The nation’s CPI rate is projected to have held steady at an elevated 2.5% in yearly terms, while no forecast is available for the core print, which excludes food and energy items; it stood at 1.3% in June. Indeed, gauges of inflationary pressures were optimistic during the month, with the nation’s Markit manufacturing PMI noting that prices charged for final products rose at the highest pace since the survey began in 2010. While another quarter-point rate hike by the BoC this year is practically fully priced in according to Canada’s OIS, a potential upside surprise in the CPIs could still stoke speculation for two more rate increases by year-end and thereby, benefit the loonie.

In the US, the preliminary U of M survey for August will be made public at 1400 GMT. Consumers are expected to have turned more optimistic during the month, with the relevant index projected to move slightly higher. Note though, this is usually not a major market mover for the dollar.

The situation in Turkey will likely remain at the forefront for a while more, even despite some signs of stabilization in recent days. The US Treasury threatened the nation with more sanctions yesterday, should Turkey not release pastor Brunson “quickly”. Beyond the political standoff with the US, investors will also look to a reassessment of Turkey’s credit rating by Standard and Poor’s today. The nation’s bonds are already rated as junk, but should the agency cut their rating even further, the lira could still come under renewed selling interest.

In energy markets, the weekly Baker Hughes survey tracking the number of active US oil rigs will be in focus at 1700 GMT.