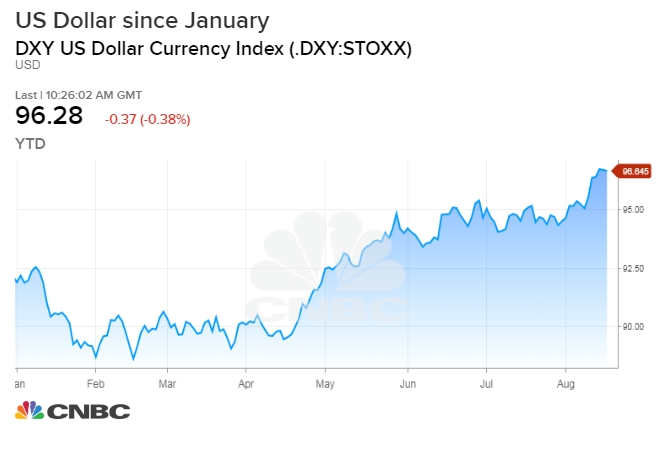 The U.S. stock market is well on its way to better-than-average gains this year, but a quick glance at overseas markets reveals a more sobering story.

Global stock markets are having a tough 2018.

While the S&P 500 is up more than 6 percent and less than 1 percent away from new highs, the iShares MSCI China exchange-traded fund is down more than 12 percent so far this year. The iShares China ETF — like others managed by financial giant BlackRock — tracks the results of an index of country-specific stocks.

Although some have speculated that fears of slower economic growth in China may be partly responsible for feeble stock performance there, Hong Kong and Shanghai are by no means alone.

“I think one of the biggest stories throughout the year has been the pressure we’ve seen on emerging markets,” said Scott Brown, chief economist at Raymond James. “A lot of these countries have high levels of debt, so higher rates put pressure there.”

Ever since the Federal Reserve began unwinding its massive balance sheet and hiking interest rates, the U.S. dollar has gradually climbed against a basket of other currencies. All else equal, higher interest rates in a country increase the value of that country’s currency as foreigners flock to take advantage of better yields.

A weak dollar tends to juice emerging markets as debt denominated in U.S. dollars becomes easier to repay with local-currency revenue. A stronger greenback, on the other hand, can drive investors back to the dollar.

The U.S. dollar fell 0.3 percent against a basket of currencies to 96.32 on Friday but remains 8 percent higher in the last six months.

The downturn in emerging market equities represents an about-face for Wall Street, which spent much of 2017 pouring cash into emerging-market ETFs.

That same ETF dipped into a bear market on Wednesday after falling more than 20 percent from its January high, with investors pulling out more than $7.2 billion since Jan. 26.

“If your liabilities are in dollars but assets/cash flow sources are in local currency, relative strength in the dollar can spell trouble,” Katie Nixon, chief investment officer at Northern Trust, said in an emailed statement on Monday. “There are certain emerging market countries with relatively weak currencies and a heavy reliance on external [predominantly dollar-based] financing. The fear is that what happens in Turkey won’t stay in Turkey.”

“Trade policy is a negative and people look at the direct impacts on tariffs, but they also create general uncertainty,&#82