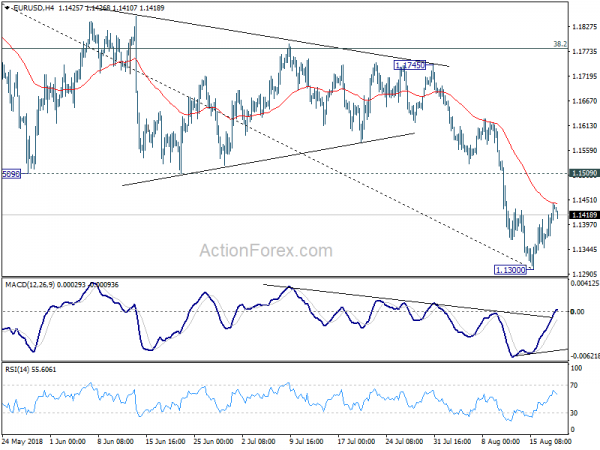 The forex markets are rather quiet today with major pairs and crosses bounded in Friday’s range. It’s back to business as usual for a Monday, without any surprise. For now, Swiss Franc is trading as the strongest, followed by Dollar. New Zealand Dollar, Euro and Australian Dollar are the weakest ones but the picture will more likely change than not as the day goes. In other markets, Nikkei closed down -71.38 pts or -0.32% at 22199.00. But other major Asian indices are in black, with HK HSI up 1.01%, China Shanghai SSE up 0.45% and Singapore Strait Times up 0.08%. Gold is back above 1180 but struggles to extend gain.

The meeting between low level US and China officials on trade this week is something that might catch attention. But just like many other market participants, we have very low expectations on it. There are speculations that the talks could set the stage for a summit between US president Donald Trump and Chinese President Xi Jinping in November. But it’s too early to tell, in particular due to the erratic nature of Trump.

German-Italian yields spread is another development to watch. Currently at 3.114, Italian 10 year yield is now significantly higher than July’s close at 2.734. German 10 year bund yield, on the other hand, is now at 0.305, comparing to July’s close at 0.446. Greece’s marathon bailout program completes today, marking the end of the Eurozone debt crisis. But there are talks of crisis revival, starting from Italy. Worries could deeper should German-Italian spread jumps above 300 again, which it did earlier this year.

UK Brexit Minister Dominic Raab will meet EU chief Brexit negotiator Michel Barnier in Brussels on Tuesday. Prime Minister Theresa May’s spokesman said that “on the agenda will be resolving the few remaining withdrawal issues related to the UK leaving the EU and pressing ahead with discussions on the future relationship.”

Raab said that securing a Brexit deal was still “the most likely outcome”. But at the same time, the government scheduled to push a series of technical notices for no-deal preparation. Raab added that the government would wanted to “clearly set out the steps that people, businesses and public services need to take in the unlikely event that we don’t reach an agreement” with the EU.

The no-deal advice will be due on Thursday and are “sensible, proportionate, and part of a common sense approach to ensure stability, whatever the outcome of talks”, according to Raab.

According to a Bloomberg survey, majority of the 31 economists surveyed expected BoE Bank rate to reach 1.25% by the end of 2019. That is, they expected two 25bps rate hikes next year. The first move is expected to come in Q2. It’s cited that Brexit is a concern that slows BoE’s tightening path. But by the time of Q2 next year, such concerned should be cleared. Meanwhile, falling inflation could only give BoE a reason to keep rates on hold until May. With Brexit cleared, and unfolded smoothly, path will be clear for another hike in November. Some analysts also saw BoE’s unanimous votes as sign that policymakers are confident enough to act twice next year. The Bank Rate currently stands at 0.75%.

But it should noted that BoE has revised down the rate path in August Inflation Report released less than three weeks ago. The central bank forecast Bank Rate to hit 0.9% in Q3 2019, revised down from 1.0%. Bank Rate is forecast to be at 1.0% in Q3 2020, revised down from 1.2%. Looking into the details, the conditioning path that BoE used didn’t price in a 25bps hike fully until 2020. And basically there would be no more hike within the forecast horizon. And based on such conditioning path, CPI is forecast to slow to 2.2% in Q3 2019, 2.1% in 2020. July’s pick up in CPI to 2.5% was in line with BoE’s expectations.

So, to us, a hike in H2 of 2019 is possible based on the current projections and developments. But