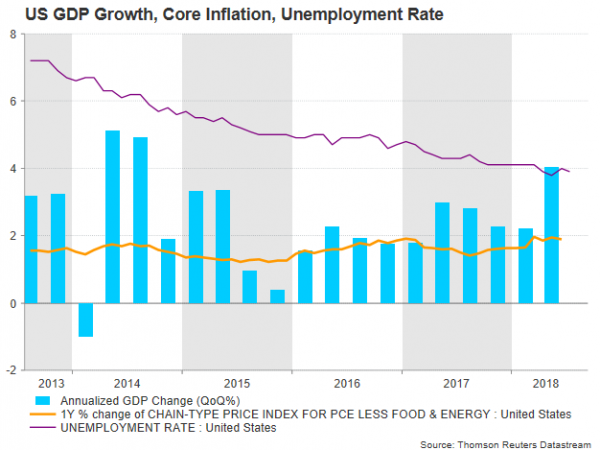 The US Federal Reserve is scheduled to release the minutes from its latest policy meeting on Wednesday at 1800 GMT and while the central bank opened the path for further rate increases this year, giving a strong assessment on the US economy, investors will be closely reading the detailed record to confirm that policymakers are indeed comfortable to raise borrowing costs even under a worsening outlook on global trade.

Having already delivered seven rate hikes since the financial crisis, the Federal Open Market Committee (FOMC) announced on August 1 that the federal funds rate will remain steady between 1.75-2.0% as was widely expected. At the same time, it expressed that the Fed plans to raise rates further this year as economic activity has been growing at a “strong rate” thanks to rising household spending and business investment, which led GDP growth to 4.1% on an annualized basis in the second quarter, the fastest expansion since Q4 2014. Policymakers assessed that the labor market is in good shape as well and with inflation near the Fed’s 2.0% target, markets turned increasingly confident that two more rate hikes could be possible this year with the first one being almost fully priced in during the late September meeting according to Fed’s fund futures. The probability for a second 25bps move currently stand at around 60%.

Regarding trade, the Fed chief, Jerome Powell, acknowledged during his testimony before Congress that US import tariffs, as well as retaliatory actions from other nations, are a risk to the US economy rather than a negative impact at the moment. He later said though, that economic growth could weaken if trade frictions fail to lead to negotiations. Still, him appearing to not worry much on the issue increased speculation that the Fed is more likely to stay on course with rate increases even if trade tensions threaten to boil over.

It is of note that the US President, Donald Trump, is among those opposing higher interest rates. Despite picking Powell as the Fed’s new chief, Trump criticized his hiking plans, saying he is “not thrilled” with higher interest rates given that the combination of higher borrowing costs and a stronger dollar would weigh on the country’s export growth and hence disrupt his efforts to limit the trade deficit. This was not the first time Trump complained about monetary policy as back in July he had also expressed his displeasure with rate rises, creating question marks on whether the President could affect the central bank’s independence. Continued attacks on the Fed by the US president will probably bring fresh downside to the dollar.

In forex markets, USDJPY spiked slightly below the 200-day simple moving average today to touch two-month lows at 109.76. However, the downfall proved to be short-lived and the pair is now looking set to finish the day in the green and above the 110 key-level. Should the FOMC minutes use a surprisingly stronger hawkish tone, probably easing concerns related to the trade story, the pair could gain ground towards the 50-day SMA, currently at 111.01. If the area fails to restrict upside movements, resistance could take place around 111.40, taken from the highs on August 15 and May 21. The peak at 112.14 reached on August 1 could be also approached in case of steeper bullish corrections.

In the alternative scenario, if the minutes highlight that trade protectionism is harmful to US businesses, the market could give up today’s gains to retest the 109.76 trough. Below that, further losses could reach the 109 round level before the 108.30 support comes into view.