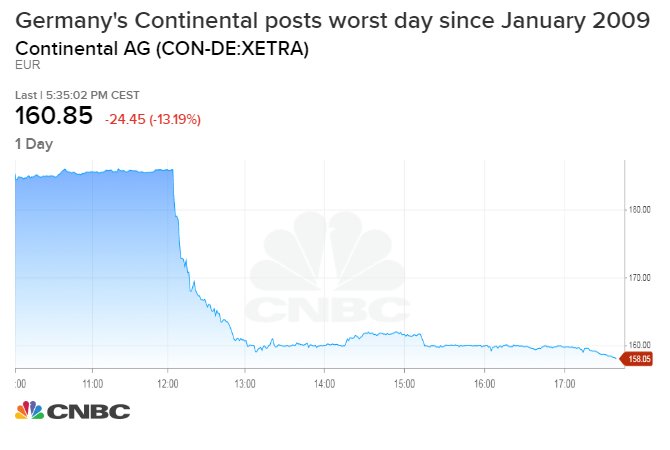 A fresh profit warning from the world’s second-largest automotive parts supplier is pressuring a number of auto-related stocks across Europe and the U.S.

Germany-based Continental AG cut its 2018 revenue outlook — pointing to weak car sales in Europe and China, higher costs for electric vehicle technologies and warranty claims. That weak guidance sent Continental’s stock plunging by more than 13 percent, ending European trading with its worst day in nearly a decade, dating back to January 2009. Continental shares are now down more than 28 percent since the start of the year.

Continental also cut its profit margin guidance and cited weak demand for tires as another factor pressuring sales expectations for the rest of the year. The company now expects consolidated sales of approximately 46 billion euros in 2018, 1 billion euros lower than its previous forecast.

Continental’s profit warning is its second this year and comes one month after the company revealed a broad restructuring that includes potentially a partial listing of its powertrain business as early as next year. While Continental is among the world’s largest tire manufacturers, the company also develops specialized brake and safety systems, as well as new technologies including automated driving tools.

Continental is the first in a series of European auto companies to issue profit warnings this year. Fiat Chrysler, Volkswagen and Daimler — the maker of Mercedes-Benz — have all cut profit expectations in recent months, blaming both the prospect of new tariffs and new emissions tests for weakening demand.

The profit warning also comes a day after President Donald Trump, at a campaign rally in West Virginia last night, renewed his threat to slap a 25 percent tariff on “every car that comes into the United States from the European Union.” Shares of German auto giants BMW, Volkswagen and Daimler traded lower in Europe on Wednesday. Global automakers have faced increased headwinds in recent months amid heightened tensions between the U.S. and its major trading partners.

Continental’s weakness also put pressure on rival companies across the Atlantic. Goodyear Tire & Rubber fell 4.1 percent, posting its worst day of trading in four months. Other auto parts makers, including BorgWarner and Aptiv, both finished lower by more than 3 percent.

Goodyear has now fallen more than 26 percent this year amid weak demand for tires and higher raw material costs.

“Headwinds are intensifying, including rising raw material costs, a strong U.S. dollar, and softening market conditions in China,” Kramer said. “We’ve adjusted our plans … to mitigate the impact of these challenges over the intermediate term and remain confident in our ability to deliver on our 2020 strategic plan.”