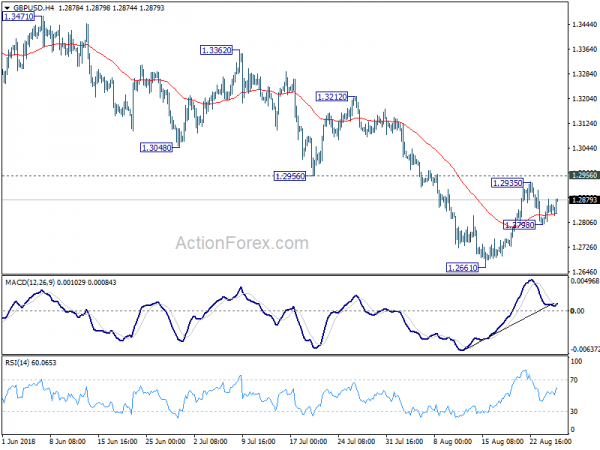 The forex markets has been rather quiet for most of the day. But activity seems to pick up in early US session. Yen remains generally firm despite strong global risk appetite. But it’s losing ground to Sterling as the the latter attempts for a rally. Euro is currently trading as the third strongest. Meanwhile, commodity currencies are generally lower with New Zealand Dollar leading, Canadian and Australian Dollar lower. But after all, major pairs and crosses are bounded in very tight range and the picture of who’s stronger, who’s weaker can easily change.

Turkish Lira suffers some selling as the local markets are back from a week-long holiday. USD/TRY hits as high as 6.2975 but there was no follow through rally to 6.346 near term resistance. The pair is actually back below 6.18 at the time of writing. As long as 6.3460 minor resistance holds, there’s nothing to worry about yet. The pair is merely staying in a sideway pattern. And the selloff in Lira isn’t reflected in corresponding moment in the forex markets so far.

In other markets, DAX is trading up 0.74% as some attribute to the rally to NAFTA optimism. CAC is also up 0.62% while UK is on holiday. Asian stocks flexed muscles with Hong Kong HSI gained 2.17%, China Shanghai SSE added 1.89%, Singapore Strait Times rose 0.39%. Nikkei also closed up 0.88%. WTI crude oil is nearly flat at 68.74, still some distance from 70 handle. Gold is fluctuating between gains and losses but recent rebound from 1160 is still expected to extend higher after consolidation finishes.

Ifo President Clemens Fuest noted in the release that “The companies were once again more satisfied with their current business situation. Business expectations were revised noticeably upwards. In addition to a robust domestic economic situation, the truce in the trade conflict with the US contributed to improved business confidence. The German economy is performing robustly. Current figures point to economic growth of 0.5 percent in the third quarter.”

French Macron: Multilateralism going through a major crisis because of US policy

French President Emmanuel Macron delivers a speech during the annual ambassadors’ conference at the Élysée Palace in Paris  today.

There he called on Europe to be a “trade and economic power” with independent tools that can fend of US extraterritorial sanctions. Macron warned that “multilateralism is going through a major crisis which collides with all our diplomatic activity, above all because of U.S. policy.” And, “the partner with whom Europe built the new post-World War order appears to be turning its back on this shared history.”

He also added that while the current system is imperfect, “unilateralism and trade war is the worst response”.  And, “we can build a fairer and more efficient system. I think we should not give in to one’s hegemony and everyone’s division”

On Brexit, Macron said “France wants to maintain a strong, special relationship with London but not if the cost is the European Union’s unravelling.” While Brexit is a “sovereign choice, which we must respect”, he emphasized that “it can’t come at the expense of the European Union’s integrity.”

Japanese Prime Minister Shinzo Abe declared his candidacy for leadership of the Liberal Democratic Party on Sunday. The party leadership contest will be held on September 20, as a two horse race between Abe and former defence chief Shigeru Ishiba.

The re-election should be an easy win for Abe as he’s got support from give of the LDP’s seven intraparty factions, which encompass around 70% of its members. A win will give Abe another three year term and he’s then on track to become the country’s longest-serving Prime Minister.

Abe told a press conference that “I have decided to lead Japan as the LDP leader and the prime minister for three more years, and with this determination, I will run for the leadership election next month.” He added that “as we prepare to welcome a historic turning point, what kind of country we want to create will be a contentious issue,” and, “I am determined to steer Japan in a new era.”

Mexico and US in final hours of bilateral NAFTA talks

The bilateral US-Mexico NAFTA talk is still dragging on. But Mexican Economy Minister Ildefonso Guajardo said on Sunday that “we’re practically in the final hours of this negotiation.” Nonetheless, at a lunch break of the meeting, Guajardo said he cannot declare victory yet.

Trump also expressed optimism as he tweeted that “A big Trade Agreement with Mexico could be happening soon!” And, “Our relationship with Mexico is getting closer by the hour. Some really good people within both the new and old government, and all working closely together”.

Canada is expected to return to the supposed trilateral talks after the US and Mexico complete their negotiations. The three way talks will run well into September and possibly beyond. The US Congress needs 90 days notice to vote on a new NAFTA. The final approval of the deal on Mexico side will be on Lopez Obrador’s hands, as he’s due to take office on December 1.

GBP/USD drew some support from 4 hour 55 EMA and recovers. But it’s staying in tight range between 1.2798/2935 and intraday bias remains neutral. Also, as 1.2956 support turned resistance stays intact, near term outlook remains bearish for further decline. On the downside, below 1.1798 minor support will target 1.2661 low first. Break will resume larger fall from 1.4376. However, considering bullish convergence condition in daily MACD, break of 1.2956 will indicate medium term bottoming. A