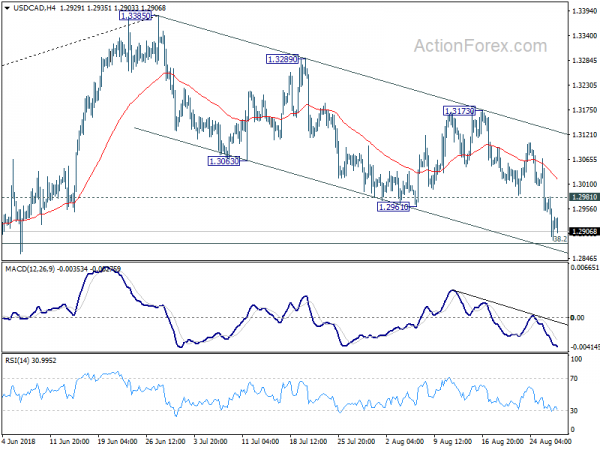 Canadian Dollar remains firms today as Canada-US trade negotiation restarted. Initial signs are positive but more work is needed to be done, swiftly. Australian and New Zealand Dollar follow as Asians stocks strengthen mildly. Yen is trading as the weakest one on risk appetite, followed by Sterling as there is no progress on Brexit talks. For the weak, Canadian Dollar is the strongest one, followed by Swiss Franc. Dollar is in red across the board, followed by Yen.

Technically, the first thing to note is the lost of momentum in stocks. Despite making new record highs, both S&P 500 and NASDAQ were bounded in tight range overnight. Both have also closed down yesterday’s open. Similarly, DAX and CAC also reversed gains yesterday despite trade optimism, with DAX down -0.09% and CAC 0.11%. Nikkei is feeling some strong resistance ahead of 23050 resistance. Hence, barring any drastic news, we’d probably see risk appetite eases a bit.

Secondly, Sterling and Aussie are both rather weak indeed even though the headlines are on Dollar and Yen. As risk appetite recedes, there’s a chance for Dollar and Yen to have a mild come back. And in that case, GBP/USD, AUD/USD, GBP/JPY and AUD/JPY could face some pressure.

Canada Freeland had very constructive meeting with Lighthizer, but MILK is the word

Canadian Dollar trades firmer in Asian session today and remains the strongest one for the week. All eyes are on the trade negotiations between Canada and the US. Canadian Foreign Minister Chrystia Freeland, who cut short a European trip to Washington, said she had “very constructive meeting” with US Trade Representative Robert Lighthizer yesterday, and the meeting will continue today. She failed that Mexico had made some “significant concessions” in the are of labor and auto rules of original. And that has “really paved the way for what Canada believes will be a good week”.

Dairy products is believed to be a key area that the US will press Canada on. White House top economic adviser Larry Kudlow said in a TV interview that “there’s a word that Canada has trouble with and it’s M-I-L-K. Milk. Anything to do with milk and dairy — they have this government-run, centrally planned system and some tariffs run upwards of 300 per cent. They’re going to have to fix that.” And, Kudlow warned that “the president did say if he cannot satisfactorily negotiate with [Canada] he may have to go to a large 20 to 25 per cent tax on Canadian automobiles headed for the U.S.” Trump also imposed a Friday deadline for Canada to join the U.S, and Mexico, which is when the administration plans to give Congress its mandatory 90-day notification of the new trade deal.

According to a report by the Globe and Mail, Canada is ready to make a major concession on Diary products.

UK BRC shop price index rose 0.1% yoy in August, up from July’s -0.3% yoy fall. More importantly, that’s the first rise in over five years, breaking a deflation cycle of 63 months. BRC noted in the release that “both higher food price inflation and lower non-food price deflation contributed to the return of Shop Prices to inflation”. However, Shop Price inflation remains well below headline CPI as a result of “high levels of competition”.

BRC Chief Executive Helen Dickinson noted that for now, “retailers are keeping price increases faced by consumers to a minimum”. However, “current inflationary pressures pale in comparison to potential increases in costs retailers will face in the event the we leave the EU without a deal”. And if that happens, “retailers will not be able to shield consumers from price increases.” She also urged that “the EU and UK negotiating teams must deliver a Withdrawal Agreement in the coming weeks to avoid the severe consequences that would result from such a cliff edge scenario next March.”

In an IMF blog article titled “Euro Area Inflation: Why Low For So Long?“, the puzzle of the broken relationship of core inflation and