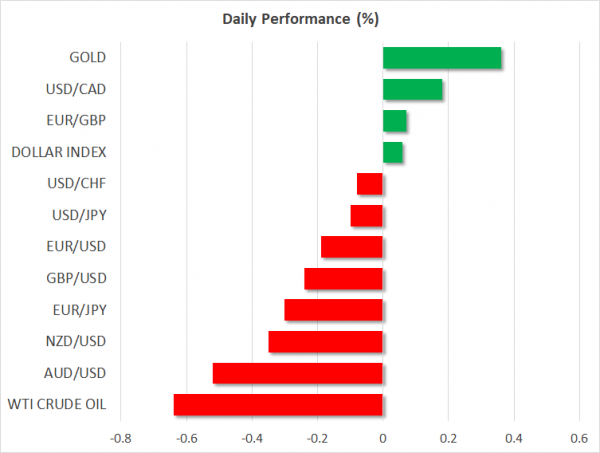 FOREX: Trump’s stubborn stance the previous day aiming to enhance US’s trade protective measures against China and keep the pressure on the EU, shifted funds away from riskier assets, pushing dollar/yen down to 110.78 (-0.16%) and dollar/franc to 0.9666 (-0.23%). The dollar index, which is set to close in the red for the third consecutive week , was also declining but marginally, last seen at 94.68 (-0.04%) as the euro and the pound felt the trade pain as well. Euro/dollar inched down to 1.1647 after Eurozone’s flash CPI figures for the month of August were slightly lower than expected, while the President of the European Commission, Jean-Claude Junker expressed his hope that the ceasefire with the US on trade will continue. Pound/dollar crossed below the 1.30 level to touch 1.2990 (-0.13%) despite the EU reiterating its intention to avoid a hard Irish border. Euro/pound stood lower at 0.8960 (-0.09%). Dollar/loonie was the best performer, trading higher at 1.3006 (+0.19%) ahead of a NAFTA deadline later today and after GDP growth readings out of Canada disappointed. In the antipodean space, aussie/dollar and kiwi/dollar were posting sharper losses, with the former standing at 0.7226 (-0.51%) and the latter at 0.6631 (-0.36%). The Indonesian rupiah dived to 14,730 per dollar, a level never seen since the 1998 crisis, on the face of the EM sell-off. The Indian rupee tumbled to a record low of 71 per dollar earlier in the day, while the Turkish lira managed to rebound to 6.58 per dollar (+1.13%) after reaching a two week low of 6.39 per dollar on Thursday.

STOCKS: European stocks were in a sea of red for the second day on renewed trade threats. The pan-European STOXX 600 and the blue-chip Euro STOXX 50 were losing 0.70% and 0.77% respectively. The German DAX 30 declined by 0.98% at 1030 GMT, the Italian FTSE MIB retreated by 0.80%, while the French CAC was the worst performer, diving by 1.2%. The British FTSE 100 was also on the backfoot, being down by 0.47%. Futures tracking US indices such as the S&P 500, Dow Jones and Nasdaq 100 were in negative territory as well, pointing to a marginally lower open today.


COMMODITIES: Crude oil prices reversed lower after reaching fresh peaks on Thursday, with WTI crude dropping to $69.73/barrel (-0.74%) and Brent slipping to $77.19 (-0.75%). The weakness appeared as investors feared that the ongoing global trade war could negatively affect demand for oil, though concerns about supply tightening on the back of renewed US sanctions on Iran limited steeper declines in crude prices. In precious metals, dollar-denominated gold had fully recovered yesterday’s decline, bouncing back towards 1,206.20 (+0.56%).

Friday’s economic calendar will get lighter later in the day, with the Chicago PMI and the University of Michigan Consumer Sentiment index out of the US being in focus. Still, any developments on the trade front as well as Brexit could prove of more interest as uncertainty around the topics keeps investors on their toes. Emerging markets will be closely watched given the recent collapse of the Argentinian peso and the Turkish lira’s free fall.

At 1345 GMT, PMI figures out of Chicago, which is a home to some of the largest US companies, are expected to show that manufacturing activity in the region has slowed down in August, driving the corresponding index lower from 65.5 to 63.0. However, this might not cause much worry as any reading above 50 translates to a healthy growing industry. A few minutes later at 1400 GMT, the University of Michigan is anticipated to revise its August US economic sentiment index higher by 0.2 points to 95.5.

Yet investors could ignore the data and remain focused on the growing trade standoff between the US and China. Yesterday the US President reminded markets that import tariffs on $200 billion of Chinese goods could still be possible once the September 6 deadline passes until which recommendations on the plans are awaited. If Trump allows bigger tariffs to go ahead, that would be the largest hit on China so far in the months-long trade battle between the counties.

Regarding US-EU trade tensions, those also resurfaced after Trump rejected the EU’s proposal to eliminate tariffs on US cars if Washington does the same, calling the offer as “not good enough” at his interview with Bloomberg on Thursday.

In the meantime, the more than a year NAFTA talks could take the front and center stage on Friday as US and Canadian trade officials are scheduled to continue intense negotiations before today’s crucial deadline with scope to reach a trilateral agreement including Mexico as well. Discussions have kicked into high gear after Trump said he had formed a preliminary trade deal with Mexico on Monday, leaving the ball in Canada’s court. While Trump’s hawkish tone raised hopes that a deal could be achieved today, the countries still need to resolve some disagreements regarding tariffs in the automotive industry.

Safe havens such as the yen are expected to attract demand if trade conflicts escalate even further, though the dollar has proved recently that it could gain in the wake of stronger trade risk as well.

Brexit could make headlines today as well, as the Brexit Secretary, Dominic Raab is preparing for a six-hour meeting with his EU negotiator, Michel Barnier in Brussels on Friday. Recall that Barnier admitted on Wednesday that the UK could be offered a special partnership “such that has never been with any other country” providing significant support to the pound. However, on Thursday he talked down expectations of a Brexit deal, saying that the EU must be prepared for a “disorderly” exit. Any news hinting that talks are on a good path, could increase long positioning on the pound.

In oil markets, Baker Hughes will report the number of active US rigs for oil drilling at 1700 GMT.

Of note, US and Canadian markets will be closed for the Labor Day holiday on Monday. At the same day, New Zealand and Australia will be publishing data on Q2 trade terms (2245 GMT Sunday) and retail sales for the month of July (0130 GMT) respectively, while August manufacturing PMIs (0030 GMT) will come out of Japan. Chinese Caixin Manufacturing PMIs for the month of August (0145 GMT) will be also under review on Monday