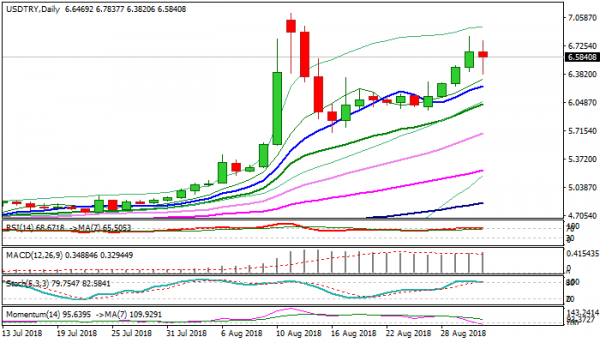 Turkish lira rose on Friday, taking a breather of four-day fall which hit the lowest since 13 Aug record low, on spike to 6.8379 on Thursday.

Lira appreciated and spiked to 6.3820 on Friday, but the actions the government is taking are likely to have short-lived positive impact on the currency, which remains under strong pressure and has registered significant losses in 2018.

At the same time, Turkish President Erdogan blamed outside factors for weakening lira and attempting to destabilize the economy, however, the key problem seems to be high inflation and inadequate reaction of Turkish central bank.

Inflation report is due on Monday, with rising fears that lira may come under increased pressure if numbers show further increase of inflation.

It will be also interesting to watch the reaction of the CBRT which holds monetary policy meeting on 13 Sep.

If the central bank fails to tackle inflation in an expected way, lira may sink further and enter uncharted territory again.

On the other side, technical studies, which so far had a minor role in directing the USDTRY pair, show negative signals developing on daily chart.