Week Ahead – Aussie in Focus as GDP and RBA Awaited; BoC and Riksbank also Meet; US Jobs Report Eyed Too 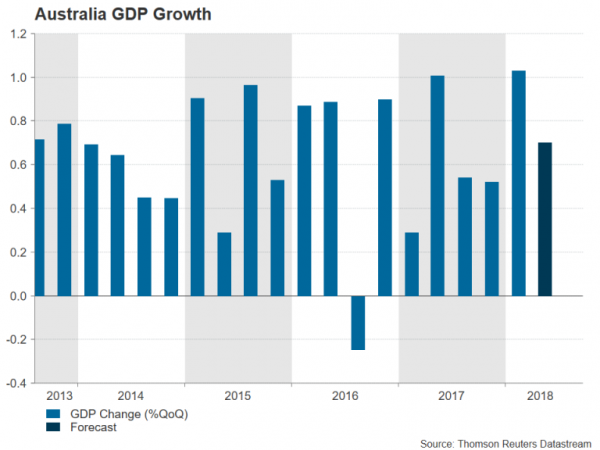 The Australian dollar will fall under the spotlight next week as a raft of data is due to be published out of Australia and the Reserve Bank of Australia holds a policy meeting. However, central bank meetings in Canada and Sweden, where near-term policy changes are on the cards, pose bigger risks for traders than the RBA’s. Monthly job reports will also be vying for attention as both the US and Canada release their respective figures for August. Also important will be PMI numbers out of the UK.

It’s been a volatile couple of weeks for the Australian currency as last week’s political drama and this week’s unexpectedly dismal capital expenditure figures have seen the local dollar see-saw up and down. The aussie looks set for more rough rides in the coming days with a flurry of economic data scheduled for release as well as an RBA rate decision. First up on Monday are July retail sales and the business inventories number for the second quarter. They will be followed by quarterly trade data on Tuesday, which will include net exports contribution – the final clue to Q2 growth before Wednesday’s GDP release. The RBA policy meeting will be the highlight on Tuesday with no change in interest rates expected. While the central bank is not anticipated to change its stance in its statement, investors will be watching for any alterations to its language on the growth and inflation outlook and whether it is growing more worried about the US-China trade dispute.

On Wednesday, GDP data is expected to show the Australian economy expanded by 0.7% quarter-on-quarter in the three months to June, slowing somewhat from the prior 1.0%. Rounding up the week will be monthly trade numbers on Thursday and housing finance figures on Friday, both for July.

Sticking with the antipodean currencies, the New Zealand dollar also came under pressure this week from disappointing data. The kiwi may find some support next week from the quarterly indicator on the terms of trade, which is expected to show an improvement in the overall terms of trade during the second quarter, with exports forecast to have increased by 2.