Sentiments Supported by Trade Truce, But Sterling Down on Renewed Brexit Worries 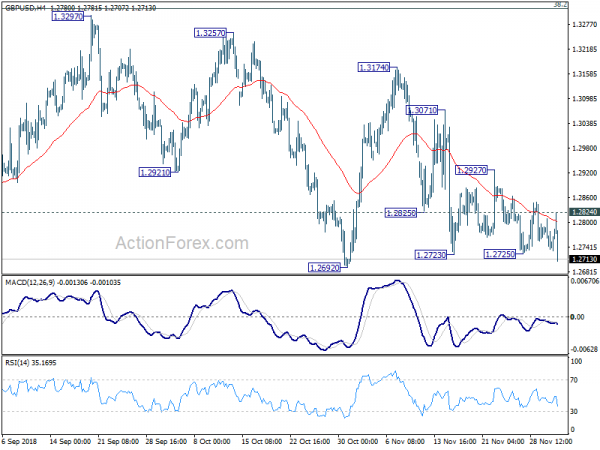 The global financial markets are blessed by strong risk appetite today, as US and China agreed on 90 days ceasefire on trade war. US stock futures point to sharply higher open, following strengthen and European and Asian markets. Australian Dollar, being a close trade partner of both the US and China, and a risk sensitive currency, is the strongest one. Canadian Dollar follows with help from rebound in oil price. Meanwhile, Sterling is the weakest one for today on renewed selloff over Brexit vote worry. For now, it’s likely that the Brexit bill will be voted down by the Parliament on December 11. Yen is the second weakest while Dollar is mixed.

Technically, AUD/USD’s rise and EUR/AUD’s fall are both in progress. GBP/USD’s break of 1.2725 minor support suggests decline resumption for 1.2661 low. 144.02 in GBP/JPY and 0.8939 resistance in EUR/GBP will be watched to see if selloff in pound widens. USD/CAD’s break of 1.3187 support today is a strong sign of near term bearish reversal after rejection by 1.3385 resistance.

Fed Vice Chair Richard Clarida  said in a Bloomberg interview that “we have a symmetric objective around 2 percent.”  And he emphasized that “two percent is not meant to be a ceiling”. He added that “we’ve operated below 2 percent, we could operate somewhat above 2 percent, depending on the shocks.” Clarida also said the US economy is in good shape with solid outlook. And, the current monetary policy framework is serving Fed well.

Eurozone PMI manufacturing finalized at 51.8, big four at the bottom

Eurozone PMI manufacturing is finalized at 51.8 in November, revised up from 51.5, down from October’s 52.0. It’s also the lowest since August 2016. Markit noted that growth of production is only marginal as demand continues to falter. Also, business confidence remains weakest in around six years. And, the euro area’s ‘big-four’ economies posted the lowest manufacturing PMI readings of all countries covered by the survey during November.

Chris Williamson, Chief Business Economist at IHS Markit noted that “manufacturers reported that demand is now falling in Germany, France and Italy, while only modest growth was recorded in Spain.” And, “the darker outlook is linked to trade wars and tariffs as well as intensifying political uncertainty and has led to increased risk aversion and a commensurate cutting back on expenditure, notably for investment.

UK PMI manufacturing rose to 53.1 in November, up from 51.1 and beat expectation of 52.0. Markit noted that trends in output and new orders strengthen slightly. But new export orders decrease for the second month running.

Rob Dobson, Director at IHS Markit. noted that “the November PMI provided a lacklustre picture of the UK manufacturing sector, as ongoing global trade tensions and Brexit uncertainty weighed on current business conditions and dampened the outlook for the year ahead.”