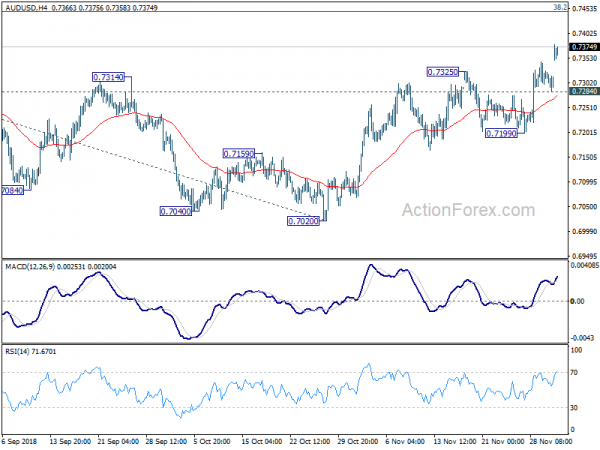 US and China agreed not to escalate trade war after meeting between Trump and Xi. A cease-fire agreement was reached. Even though it’s just for 90 days, Asian markets responded positively to the development with all major indices recording solid gains. DOW futures are also pointing to a day of 2% gain for now. In the currency markets, Australian Dollar is the biggest beneficiary and have a strong head start to a busy week. Canadian Dollar and New Zealand Dollar follow as the next strongest. Yen is naturally the weakest one on return of risk appetite. Dollar is the second worst performing, and will need some support from this week’s data including NFP, as well as Powell’s testimony to reversed weakness.

Technically, AUD/USD finally shows some conviction by gapping up through 0.7314 key resistance. That should seal the case of medium term bullish reversal and next target is 0.7446 fibonacci level. USD/CAD’s steep fall today also add credence to the case of rejection of 1.3385 resistance Immediate focus is back on 1.3187 support for confirming near term reversal. Elsewhere, EUR/USD, GBP/USD, USD/CHF, USD/JPY, EUR/GBP, EUR/JPY and GBP/JPY are all staying in familiar range only.

US President Donald Trump hailed that he had an “amazing and productive meeting” with Chinese President Xi Jinping, as sideline of G20 summit in Argentina. Both sides agreed to ceasefire on trade war for 90 days and work on structural changes in China. China also agreed to start buying US agriculture products immediately. Trump said there are “unlimited possibilities for both the United States and China.”

In a White House statement:

Just a day after the cease-fire agreement with China. Trump just tweeted that China has agreed to “reduce and remove tariffs on cars” from the US. And the current tariff is 40%.

Japan PMI manufacturing finalized at 52.2, momentum tilting towards a slowdown

Joe Hayes, Economist at IHS Markit noted that “October’s bounce-back was indeed a transitory jump”. And, “the underlying picture remains subdued, with momentum tilting towards a slowdown.” ” Subdued sales performances reflected fragile conditions both domestically and abroad. According to firms, weak demand from China and parts of Europe hampered export growth.”

Also from Japan, capital spending rose 4.5% in Q3, much lower than expectation of 8.6%.

China Caixin PMI rose 0.1 to 50.2 in November, slightly above expectation of 50.1. Markit noted in the release that production is unchanged for the second month running. There is further in crease in total new work, but export trends remains subdued. Meanwhile, input cost inflation softens to seven-month low.

Dr. Zhengsheng Zhong, Director of Macroeconomic Analysis at CEBM Group noted in the release that “Overall, domestic demand across the manufacturing sector improved in November, while overseas demand was still subdued. Production slowed, confidence was relatively stable, capital turnover was improved, and upward pressure on industrial product prices eased. China’s economy was weak, but did not show significant signs of deterioration.”