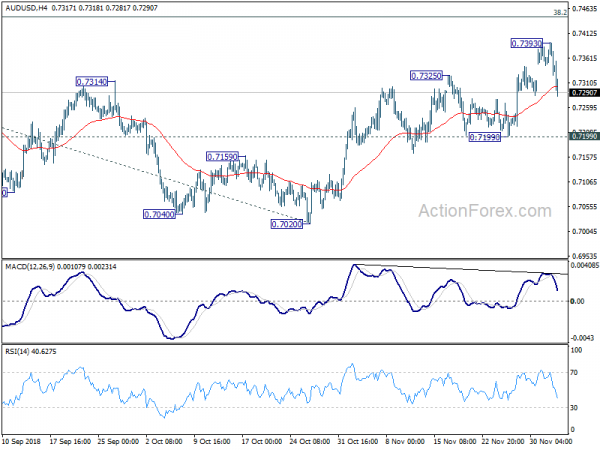 In the treasury markets, US 10 year yield closed below 3% level for the first time since September. More importantly, 10-year yield dropped sharply by -0.68 to 2.924. 30-year yield dropped even deeper by -0.100 to 3.178. US yield curve is inverted between 3- and 5-year and that’s another development that worried investors. It should also be noted that German 10-year bund yield closed at 0.264 yesterday, lowest since May, and less than half of October high at 0.577. Japan 10-year JGB yield dropped to as low as 0.053 earlier today, and hit the lowest since July. And, 10 year JGB yield hit as high as 0.166 just back in early October. So, the movements in the bond markets are rather drastic.

In the currency markets, Australian Dollar is overwhelmingly the weakest one for today. The Aussie suffers double blow of risk aversion and large GDP miss. Sterling follows as the second weakest as Prime Minister Theresa May’s debate of her Brexit deal in the parliament didn’t go