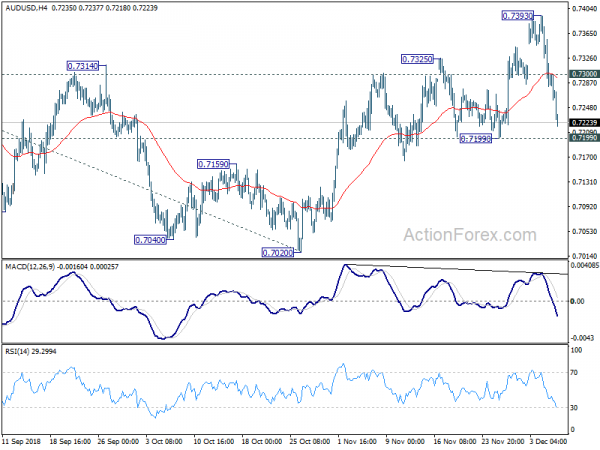 Risk aversion intensifies in Asian session again. In particular, Hong Kong stocks lead the decline on news of arrest of Chinese tech giant Huawei’s CFO Meng Wanzhou. The arrest is reported to be in relation to Huawei violating US sanctions by shipping US originated products to Iran and some other countries. Canada also confirmed that Meng is facing extradition to the US. The arrest also prompted concerns over Chinese retaliation on US executives.

Technically, USD/CAD is likely in medium term up trend resumption. We’ll see if it can sustain above 1.3385 key resistance to confirm. CAD/JPY’s firm break of 84.61 support already confirm resumption of fall from 89.22. Outlook in Australian Dollar is starting to look bad. AUD/USD is heading back to 0.7199 support and EUR/AUD is eyeing 1.5781 resistance. Break of these levels will argue that recent rebound is Aussie is finished and turn outlook bearish again. Meanwhile, EUR/USD, USD/CHF, GBP/USD and EUR/GBP are trading in familiar range. These pairs are still awaiting breakout.

Canadian Dollar dropped sharply yesterday after BoC kept overnight rate target unchanged at 1.75% as widely expected. But the central bank sounded rather concerned with recent slump in oil prices. Depending on the developments, further weakness in oil price could lead to downward revision in growth projections, slower rate hike next year, or even a pause.

The statement noted that oil prices have “fallen sharply” since the October MPR, “reflecting a combination of geopolitical developments, uncertainty about global growth prospects, and expansion of U.S. shale oil production”. And, “benchmarks for western Canadian oil – both heavy and, more recently, light – have been pulled down even further by transportation constraints and a buildup of inventories”. “In light of these developments and associated cutbacks in production, activity in Canada’s energy sector will likely be materially weaker than expected.”

The statement also concluded by maintaining tightening bias to move interest rate towards neutral. However, the pace will depend on a number of facts. Added in this statement, “the persistence of the oil price shock, the evolution of business investment, and the Bank’s assessment of the economy’s capacity will also factor importantly into our decisions about the future stance of monetary policy.”

Sterling could have 6% swing depending of Brexit vote outcome

Sterling is one of the weakest currency this week, just next to risk aversion pressured commodity currenc