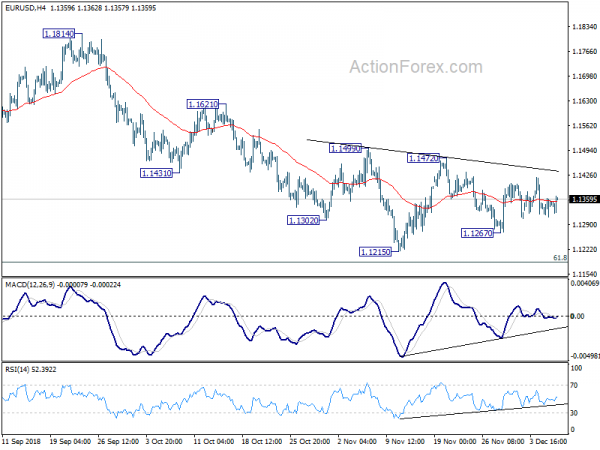 Dollar softens mildly against European majors in early US session after weaker than expected job data. But risk aversion remains the overall theme of the market. Australian Dollar stays the weakest one, followed by Canadian and New Zealand Dollar. WTI crude oil is back at 51.2 as even though OPEC+ might agree to a production cut next yet, the number could be more symbolic than substantial. Meanwhile, Yen remains the strongest ones, followed by Europeans. Sterling is somehow hibernating, waiting for next week’s Brexit vote in UK Commons.

Some attributed stocks selloff to arrest of Chinese tech giant Huawei’s CFO in Canada, on request by the US. There are worries that such act could jeopardize US-China trade truce. And there are talks that investors simply don’t believe there’s anything concrete out of the Trump-Xi meeting. But we’d like to point out again that US Trade Representative Robert Lighthizer was assigned to take over the negotiation. Lighthizer is the only one in the cabinet who knows how to make a trade agreement, like the USMCA. And he’s now leaving EU Trade Commission Cecilia Malmtrom behind, with focus turned to China. That’s strong enough a signal that both sides are going to deliver something solid in the next 90 days or so. Or at least, Trump believes so.

Technically, EUR/USD, USD/CHF, GBP/USD, USD/JPY, EUR/JPY are bounded in familiar range. USD/CAD is showing some convincing to holding itself above 1.3385 key resistance. 1.3685 fibonacci level would be next target should WTI crude oil breaks below 50 handle again. AUD/USD is now pressing 0.7199 support. EUR/AUD is also smelling 1.5781 resistance. Break of these two level will prompt deeper selloff in the Aussie.

US ADP report showed only 179k growth in private sector jobs in November, down from 225k and missed expectation of 200k.

In the release, Ahu Yildirmaz, vice president and co-head of the ADP Research Institute, noted that “although the labor market performed well, job growth decelerated slightly”. Also, “Midsized businesses added nearly 70 percent of all jobs this month. This growth points to the midsized businesses’ ability to provide stronger wages and benefits. It also suggests they could be more insulated from the global challenges large enterprises face.”

UK PM May on Brexit vote: My deal, no deal, or no Brexit

In a BBC radio interview, UK Prime Minister Theresa May tried to play down the chance of delaying the December 11, Tuesday, Brexit vote in the parliament. And she added what she’s doing is leading up to the vote, rather than talking about delaying it.

May said that there are three options for the MPs. The first one is leaving EU with a deal, that is her deal. Second is leading EU with no deal. And the final one is having no Brexit at fall. She also insisted that if the deal is voted down, it’s up for those who opposed to propose a plan B.