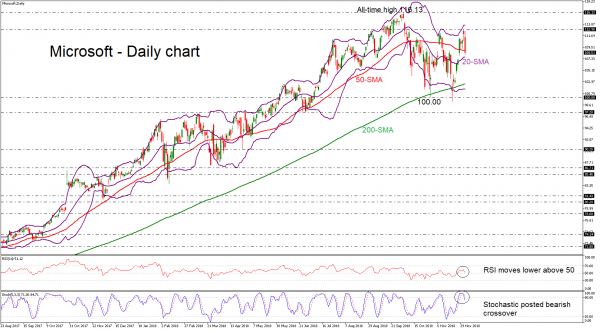 Microsoft stock price moved lower on Tuesday, hitting the 50-day simple moving average, after finding resistance on the 112.90 hurdle. Looking at the momentum indicators, the RSI is edging lower, slightly above its neutral threshold of 50, while the stochastic is falling and created a bearish crossover within the %K and %D lines in the overbought zone, signaling further losses.

In the event of further negative pressures, the market could meet immediate support at the mid-level of the Bollinger Band around 107.62 at the time of writing before slipping until the 200-day SMA and the lower Bollinger Band near 102.00. If the market faces steeper declines, the stock could touch the 100.00 strong psychological level.

On the other side, a move to the upside could find resistance at the 112.90 obstacle, which stands slighlty below the upper Bollinger Band. A rally and a violation above this barrier could increase chances for more advances towards the all-time high of 116.13 barrier, reached on October 3.

To conclude, Microsoft stock switched the bullish tendency to a more neutral one in the short-term after the drop until the 100.00 handle and the consolidation within the bands of the Bollinger.