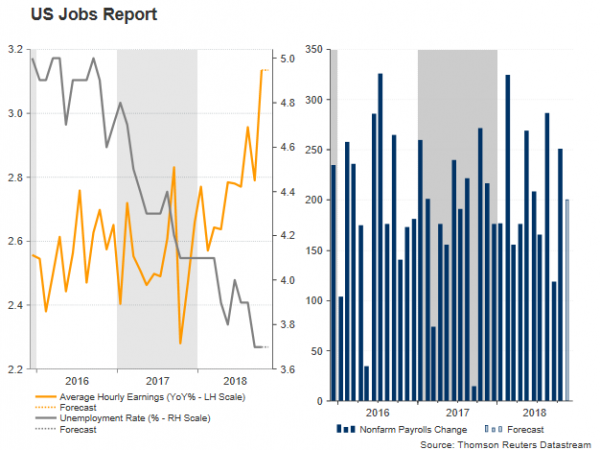 The last time US nonfarm payrolls were released, investors turned more positive that the Fed would raise interest rates at least twice next year as wages recorded their largest increase in 9 ½ -years and employment growth bounced back. This time, the jobs report comes on the heels of a less hawkish Fed, and the data are not expected to be more delightful. Hence, investors will be closely scrutinizing the numbers as policymakers seem to be resuming their data-dependent approach.

On Friday at 1330 GMT, the US government is expected to say that nonfarm payrolls in both the public and private sectors rose by 200k in the month of November, somewhat less than in October when the measure bounced up by 250k, but still at normal levels. The rest of the report is anticipated to remain unchanged, with the unemployment rate standing at 3.7%,  the lowest in 18 years, and average hourly earnings growing steadily at 3.1% y/y, the strongest pace in almost a decade.

While the labour market looks healthy and tight, which in theory should speed up inflation, estimates of the core Personal Consumption Expenditure Index (PCE), showed surprisingly that inflation cooled down to 1.8% y/y in November, back below the Fed’s 2.0% price goal.

This in combination with a slowing GDP growth – it fell from 4.2% in annualized terms in Q2 to 3.5% in Q3 – are feeding skepticism that the central bank might turn more careful with monetary policy after delivering another rate hike in December as the Fed chief Jerome Powell probably tried to communicate at the Economic Club of New York last Wednesday. Powell, who previously claimed that interest rates are far away from estimates of neutral – the level that neither stimulates nor restricts economic activity – is now supporting that borrowing costs are just below them.

But given that the range of neutral estimates is between 2.5% and 3.5% and the current Fed funds rate is 2.0%-2.25%, the Bank could raise rates once to reach the lower bound of the neutral range and four more to touch the top of it. Therefore, Powell and his colleagues may still raise rates further, but will likely require concrete evidence that consumers and businesses are able to cope with higher borrowing costs. In other words, upcoming data including Friday’s NFP numbers may need to come in better than analysts predict, for markets to believe that the Fed is back on the rate hiking course next year.

Investors also seem to be using the spread of longer and shorter-term Treasury yields as a prediction of how the economy will evolve in the future. On Monday, the dollar fell after the 2-year Treasury yield dropped below the 5-year yield, which implies investors are betting that the economy is poised to weaken and that the Fed may need to cut rates again in the next years.

Undoubtedly, the US-Sino trade dispute is another topic in concern which could put the Fed’s tightening plans on hold in case the governments fail to reach a compromise. Both sides agreed to pause the trade war for the next 90 days and restart negotiations during the G20 summit, but they still have not convinced markets that a solution could be found in such a short period.

Turning to FX markets, the dollar is set to close lower against the Japanese yen this week, though an upbeat jobs report could help the US currency to recover somewhat on Friday, perhaps sending the pair up to 113.16, the 50% Fibonacci of the upleg from 112.29 to 114.00. An upside surprise in the numbers – especially in the wage growth readings – could also bring the 38.2% fibo of 113.37 under the spotlight before the 113.62-113.80 area comes into view.

Alternatively, should the figures miss forecasts, adding speculation that the Fed might indeed deliver just a single rate hike in 2019 as is currently priced in by markets, it would be interesting to see whether dollar/yen can reach the previous low of 112.29. A breach of that bottom would then shift attention to 111.80.