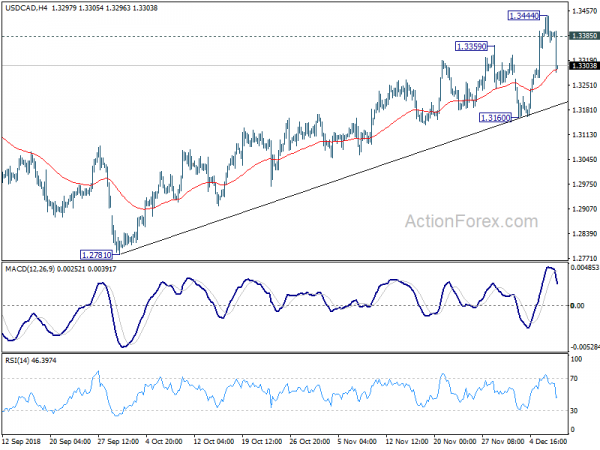 Dollar spikes lower in early US session after non-farm payroll report showed lower than expected job and wage growth. That adds to argument that the momentum US job growth has peaked. Nevertheless, there is no follow through selling in the greenback seen. The only exception is USD/CAD with Canadian Dollar shot higher by stellar employment data. For today, Canadian Dollar is now the strongest one. It’s followed by New Zealand Dollar and then US Dollar. Yen is the weakest one as risk sentiments stabilized. Sterling is hibernating as the second weakest.

Technically, USD/CAD fails to sustain above 1.3385 resistance and drops sharply. But break of 1.3160 support is still needed to indicate near term reversal. Otherwise, further rise remains in favor, at a later stage. EUR/USD, GBP/USD, USD/CHF, EUR/GBP and EUR/JPY are still bounded in familiar range. AUD/USD and EUR/AUD are still pressing 0.7199 support and 1.5781 resistance respectively.

US non-farm payroll report came in generally weaker than expected. NFP showed only 155k growth in November, well below expectation of 200k. Prior month’s figure was also revised down from 250k to 237k. Unemployment rate, though, as unchanged at 3.7% and matched expectation. Meanwhile, average hourly earnings rose only 0.2% mom, missed expectation of 0.3% mom. The data adds to the argument that while US job growth is still strong, momentum has already peaked.

Canada employment market surged strongly by 94.1k in November, well above expectation of 10.0k. Unemployment rate dropped to 5.6%, down from 5.8%. That’s also the lowest level since 1976. Canadian Dollar surges sharply after the release. In particular, against Dollar which is pressured by NFP miss.

After repeated rumors, Italy still haven’t submitted the revised Draft Budget Plan to European Commission up till now. It’s reported again today that the coalition government will have the budget ready by next Wednesday.

Another rumor comes up on Economy Minister Giovanni Tria’s resignation, on budget row with the cabinet. It’s reported that Five Star movement has requested Tria to step down, for ceding too much ground to EU. However, it seems that the League wants Tria to stay.

Five-Star leader, Italian Deputy Prime Minister Luigi Di Maio denied the rumor today and said “Tria is doing a great job and a winning team must not be changed”.

BoJ Governor Haruhiko Kuroda told the parliament today that “the economy is sustaining its momentum for achieving our 2 percent target. But that momentum lacks strength, so we will carefully watch developments.” For now, though, Kuroda added ” I don’t see the need to take additional monetary easing steps”. And BoJ has no preset idea of what tools to use if more easing is needed, but policy makers will “carefully weigh the cost and benefit of any step we take.”

Released from Japan, household spending dropped -0.3% yoy in October, much worse than expectation of 1.2% yoy rise. Labor cash earnings rose 1.5% yoy, higher than expectation of 1.0% yoy. Leading index dropped to 100.5 in October. The weak spending data highlights the fact that there is no condition for consumption to strengthen yet. It still take time for the rise in wages to pass though to consumption and then inflation.

Separately, according to a Reuters poll, 55% of Japanese companies expect 2019 growth to be around the same as 1% in 2018. 31% see it slowing and only 14% see it accelerating. Among the concerns of business, the planned sales tax hike in October and US-China trade war top. US-Japan trade negotiations, emerging markets and Middle East tensions are also seen as risks to growth.

USD/CAD drops sharply in early US session as the pull back from 1.3444 accelerates, after failing to sustaine