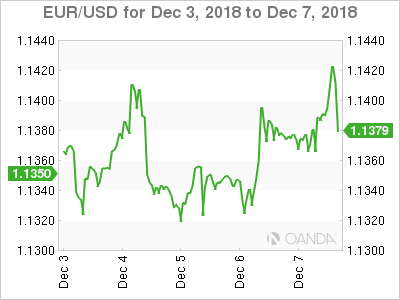 The US dollar is mixed on Friday after a disappointing US jobs report. The NFP showed a 155,000 jobs gain in November, well below the 200,000 forecast. Weather issues played a part but overall the report will have a small impact on the December Fed meeting. What investors are focusing on is the effect it will have on future rate hikes in 2019. Fed member comments and softer data continue to make a case for less rate hikes next year. Inflationary pressures remain subdued and next week’s CPI and retail sales could further cement a narrative of a pause in the tightening of monetary policy by the Fed.

The EUR/USD gained 0.31 percent on Friday. The single currency is trading at 1.1411 after a lower than expected US U.S. non farm payrolls (NFP) report in November. The number of jobs fell short of the forecast, and while wages rose by 0.2 percent the greenback fell against the euro. US employers are facing obstacles to keep hiring as wages are only just begging to catch up, but as global trade concerns rise growth forecasts come into play.

Growth concerns in the eurozone are rising as on one hand the Brexit divorce continues to create uncertainty and on the other economic indicators show a lack of momentum. The European Central Bank (ECB) will host its final monetary policy meeting of 2018 on Thursday, December 13 at 7:45 am EST. The ECB is expected to announce the details of its asset purchase program and a possible timeline of the first interest rate lift.

The USD/CAD fell 0.61 percent on Friday. The currency pair is trading at 1.3300 after Statscan announced the Canadian economy had added 94,100 jobs in November. The massive gain pushed the unemployment rate to an all time low of 5.6 percent. Oil prices surged on the back of the Organization of the Petroleum Exporting Countries (OPEC) agreement to cut production giving further support to the loonie.

The Canadian dollar advanced at the same time the US dollar was dealing with its employment data release. Investors were bombarded by Fed comments this week that are signalling less rate hikes from the American central bank in 2019. The neutral rate appears to be close to the current rate and the FOMC meeting on December 19 is sure to include comments on the pace of rate hikes for next year.

The Bank of Canada (BoC) held rates at 1.75 percent this week and remains in focus as the strong job gains have once again put a January rate hike firmly on the table.

Gold Higher on US Dollar Softness

Gold rose 0.96 percent on Friday. The yellow metal is trading at $1,248 as Fed rhetoric is cooling down rate hike expectations for next year and the employment report miss highlights a lack of urgency in the central bank to keep tightening monetary policy.

Fed doves were out in full force and were validated by the lower than expected jobs number and wage growth forecasts.

Risk events abound in the close of the year and the yellow metal has regained the favor of investors as a safe haven. Gold will remain in current levels as the various geopolitical disputes and regional issues will continue to guide markets.

Oil rose 3 percent to finish the week. The OPEC and other major producers will cut their production levels by 1.2 milliondaily barrels. OPEC will cut 800,000 barrels and other producers 400,000. The meetings were a tense affair and various members resisted joining the agreement. Saudi Arabia rallied the membership, but faced old obstacles as a showdown with Iran threatened to derail the agreement similar to the situation during the Doha meeting.

Crude has been volatile as oversupply fears have put downward pressure on prices. OPEC members led by Saudi Arabia are introducing a sequel to the pact that brought stability to oil prices through supply restrictions.

Challenges remain as producers outside of the group that agreed to the cut, are not bound by the agreement. The US in particular has turned from importer to exporter of crude. The desire of the OPEC to drive shale operations out of business cause the free fall of crude, and could now put shale back on the map if prices remain bid.