Sterling Might Wake Up as Brexti Vote Approaches, Busy Week Ahead 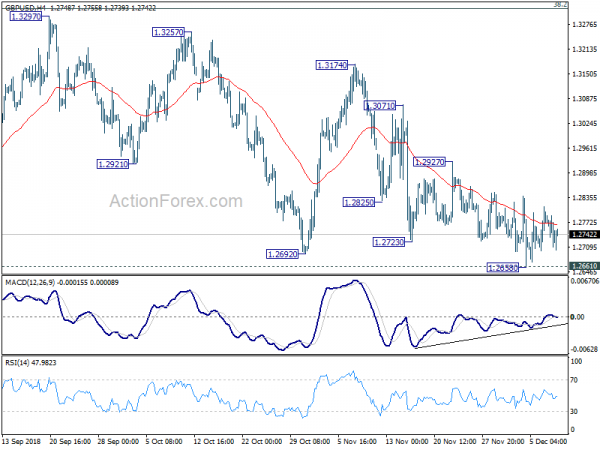 Asian stocks open the week lower, following Friday’s selloff in the US. But the forex markets are pretty steady. Dollar is the weakest one for now, followed by Sterling and then Canadian. On the other hand, New Zealand Dollar leads the way higher, followed by Euro and then Japanese Yen. As usual on a Monday, the picture could drastically change throughout the day. In particular, Sterling is still hibernating in tight range except versus Euro. It might finally wake up as Tuesday’s Brexit deal vote approaches.

Technically, while EUR/USD strengthens today, it’s capped below 1.1472 resistance and thus, there is not indication of bullish reversal yet. This is a key level to watch should Dollar’s weakness extends. On the other hand, 1.2661 is key support in GBP/USD is another level to pay attention to. Break of which will be a sign that Sterling bears are finally coming out.

UK PM May: Voting down the Brexit deal would take UK into uncharted waters

Ahead of the parliamentary vote on the Brexit deal on Tuesday, Prime Minister Theresa May warned on Sunday that voting down the deal could take the UK into “uncharted waters”. And, that would mean “grave uncertainty for the nation with a very real risk of no Brexit or leaving the European Union with no deal.” She added “when I say if this deal does not pass we would truly be in uncharted waters, I hope people understand this is what I genuinely believe and fear could happen.”

At this, chance remains very slim for the bill to be passed. And there are rumor that May could pull the plug and postpone the vote. And she could go back to Brussels for some tweaks first. but Brexit Minister Stephen Barclay warned that “the risk for those who say simply go back and ask again, the risk is that isn’t necessarily a one way street, the French the Spanish and others will turn round, if we seek to reopen the negotiation, and ask for more.”

USTR Lighthizer: Trade talks with China not going beyond March

US Trade Representative Robert Lighthizer commented on trade negotiation with China for the first time since taking the leading role. He noted that 90 days talk has a “hard deadline” and Trump is “not talking about going beyond March. And, “the way this is set up is that at the end of 90 days, these tariffs will be raised”. US has postponed raising of tariffs on USD 200B in Chinese imports from 10% to 25% after Trump-Xi meeting.

Lighthizer also said the US need “agricultural sales” and “manufacturing sales”. But at the same time “we need structural changes on this fundamental issue of non-economic technology transfer.” And, Americans “can be reassured that if there is a deal that can be made that will assure the protection of U.S. technology…and get additional market access…the president wants us to do it.” But he also echoed Trump’s rhetorics that “if not we will have tariffs.”

In a report released over the weekend, OECD said Australia’s “long span of positive output growth continues”. And, “continued robust output growth of around 3% is projected in the near future”. On RBA, OECD said that “in the absence of negative shocks, policy rates should start to rise soon”. It warned that “monetary conditions remain very accommodative, with the risk of imbalances accumulating further if the low-interest rate environment persists.” And, “in the absence of a downturn, a gradual tightening should start as inflation edges up and wage growth gains momentum.”

However, OECD also warned that the housing market is “a source of vulnerability”. So far, “data point to a soft landing without substantial consequence for the overall economy.” But “risk of a hard landing remains.” And it urged authorities to “prepare contingency plans for a severe collapse in the housing market. These should include the possibility of a crisis situation in one or more financial institutions.

The week is very busy ahead. Brexit vote in the UK on Tuesday (supposedly) would be a key event risk. Also, Italy may finally resubmit its revised budget plan to EU. Besides Two central banks will meet. SNB should keep monetary policy unchanged without a doubt. And based on recent global market volatility, SNB should also reiterate the need to maintain negative interest rate, and stand ready for intervention if needed.

No change in ECB’s immediate plan is expected. That is, interest rates will be kept unchanged and ECB will stop asset purchase program after December. The main question is how ECB is viewing the current slow down in Eurozone growth. Would they maintain that Q3’s slow down was just temporary? Or would they change the tune. A dovish shift doesn’t necessarily change the forward guidance of keep interest rates at present levels at least “through the summer of 2019”. ECB has enough flexibility in the guid