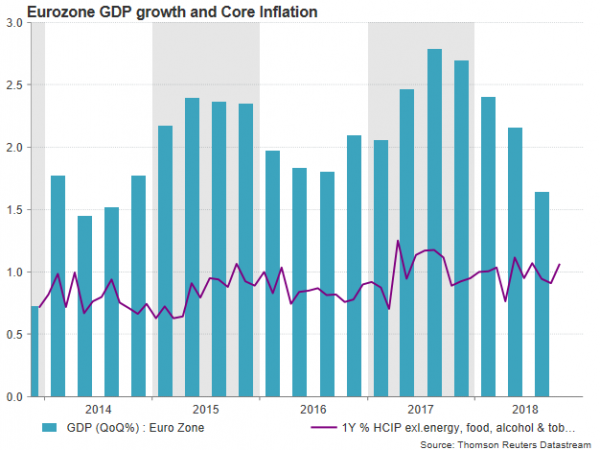 The European Central Bank will hold its last policy meeting for the year on Thursday at 1245 GMT and consensus is for policymakers to keep interest rates steady and terminate the quantitative easing program as promised. The Bank will also update its growth and inflation projections in the same day but with economic indicators showing no signs of recovery and political risks still hanging in the background, it would be interesting to see how the ECB will support the bloc from now on.

After an upbeat performance in 2017, the Eurozone economy lost significant momentum in 2018, with GDP growth dropping from 2.8% y/y in Q4 2017 to 1.6% y/y in Q3 2018. Specifically, Germany, Eurozone’s powerhouse, saw its worst quarter after more than two years, shrinking by 0.2% q/q in Q3 as environmental restrictions in the automotive industry weighed on the German car business.

Inflation was another weak spot despite the extraordinarily accommodative monetary policy the central bank has used during the past few years. While negative interest rates and the bond buying program should have boosted inflation pressures in theory, the core CPI, which excludes volatile items such as food and energy, did not improve much in the eurozone, holding around 1.0% y/y- far below the 2.0% target the Bank aims to achieve.

Besides data, how could policymakers tighten monetary policy when the political confusion in key economies such as Italy threatens the financial stability in the bloc, while the US trade policy has reduced the appetite for investments? Italy, the third biggest EU economy, holds the second largest debt-to-GDP growth in the eurozone and its proposed spending plans for 2019 are currently not in line with EU rules, as long as the budget points to a deficit target of above 2.0%. A failure to please EU leaders could lead to a collapse of confidence in Italian financial markets which could later spread to the Eurozone. At the same time, the EU is also aware of the significant negative consequences Brexit could cause in the bloc if the negotiations don’t deliver a deal that disrupts financial and trade relations between the UK and the EU as little as possible. Meanwhile another focal point is France, where President Macron is working hard to regain popularity after his proposals for a fuel tax rise brought violent protests and severe property damage in Paris.

While the ECB is confident that economic conditions are strong enough to allow the termination of the asset purchase program, the above risks suggest that a downward revision of growth and/or inflation projections is not unlikely and therefore some support is still needed. ECB officials have previously stated that the Bank will continue to aid through cash reinvestments of maturing bonds for an extended period of time and analysts will likely expect more details on this front on Thursday. Moreover, rumours are flying that a new round of targeted long-term refinancing operations will soon be announced – the program that allows credit institutions to borrow for up to four years based on their loans to households and non-financing corporations. Hence, analysts will be keen to hear whether the ECB is anticipating further weakness and in which way it plans to address any downside pressures. Concerning interest rates, markets are certain that they will remain unchanged at least through the summer of 2019, unless data evidence points to the need for an adjustment.

In FX markets, demand for the euro is limited as fears over a potential escalation in EU-Italian political relations and EU-US trade tensions keep funds in safer places. A dovish ECB meeting on Thursday, where policymakers downgrade forecasts and announce specifics on supportive measures,  could pull euro/dollar back to the 1.1300 round-level. Below that, support could run down to 1.1265, while stronger bearish actions may also meet a crucial obstacle around the 1.1213 bottom. A violation of the latter could then increase negative momentun towards the 1.1118 barrier.

In the alternative and less likely scenario, in which the ECB appears confident that the economy will remain resilient to rising risks and a tighter labor market will push inflation higher, euro/dollar might revisit the 1.1400 handle. Steeper increases may also retest the area around 1.1440 before the 1.1500 level comes into view.