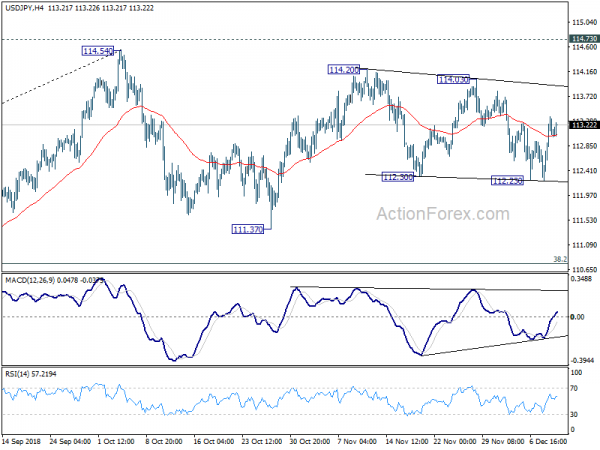 Risk appetite has a strong come back today on progress in US-China trade negotiations. It’s reported that China is considering to response to Trump’s request and cut auto tariffs down from 40% to 15%. Trump also tweeted that there were productive conversations with China and urged people to watch for important announcements. At the same time, the arrest of Huawei’s executive faded into background as both sides delinked it to trade negotiations.

For now, Australian Dollar is the strongest one for today, followed by New Zealand Dollar. Sterling is trying to pare back some losses but it’s still feeling heavy. The pound’s fate will depends on the result of UK Prime Minister Theresa May’s quick EU tour, in particular the meeting with European Council President Donal Tusk at 1600 GMT. Dollar is trading as the weakest one, followed by Canadian and Yen.

Technically, there is no new developments in the markets, while the pound recovers, it’s near term bearish for further decline after brief consolidations. Australian Dollar may finally make up its mind for a rebound and seems to have defended 0.7199 against Dollar. Euro is a tricky one for now as EUR/USD and EUR/JPY are staying in near term range. We’ll see if the pull back in EUR/GBP and EUR/AUD would spill over to other pairs.

Released from US, headline PPI slowed more than expected to 2.5% yoy in November. But core PPI surprised on the upside and accelerated to 2.7% yoy.

In latest news of US-China trade talk, Bloomberg reports that China is considering to bring down auto tariffs from the current 40% to 15%. And a proposal has been submitted for review by the cabinet in the coming days. Additionally, Trump also tweeted “Very productive conversations going on with China! Watch for some important announcements!”

Earlier today, the Chinese Ministry of Commerce said in a very brief statement about the phone call between Vice Premier Liu He, US Trade Representative Robert Lighthizer and Treasury Secretary Mnuchin earlier today. It noted that “both sides exchanged views on putting into effect the consensus reached by the two countries’ leaders at their meeting, and pushing forward the timetable and roadmap for the next stage of economic and trade consultations work.”