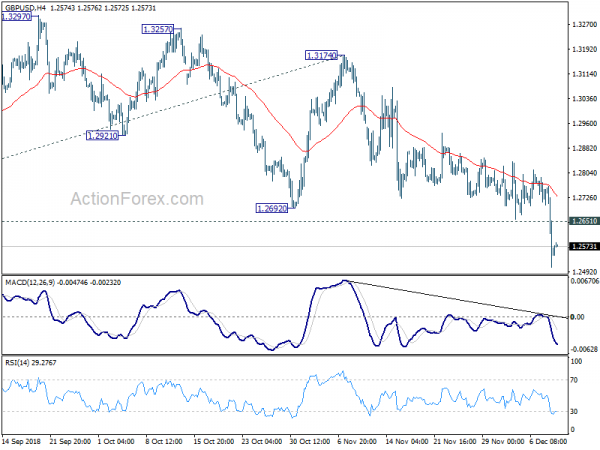 Sterling tries to recover some ground in Asia, after yesterday’s heavy selloff. But there is no sign of a turn a round in the Pound. The Brexit parliamentary vote is now called off and UK Prime Minister Theresa May is going back to the EU to seek changes on the deal, including the backstop. However, responses from EU are so far rather blunt. European Council President Donald Tusk insisted there is no renegotiation, including the backstop. We’ll see how the developments unfold, but Sterling will likely stay pressured for a while.

Staying in the currency markets, Canadian Dollar is the weakest one for today, followed by Dollar, and then Euro. Australian Dollar is the strongest, followed by Yen. Directions maybe a bit unclear from today’s picture. But overall, risk sentiments remain fragile despite the strong reversal in US stocks overnight. Yen and Swiss Franc, and to a lesser extent Dollar, could have a slight upper hand against Europeans and commodity currencies.

Technically, it’s clear that Sterling is bearish. EUR/GBP could have another take on 0.9098 resistance today. And any upside acceleration could pave the way to 0.9305 key resistance. GBP/JPY will also likely extend current fall to 139.88 support. EUR/CHF broke 1.1260 support yesterday to resume recent decline from 1.1501. It should be heading towards 1.1173 low. Rejection of EUR/GBP by 0.9098, and persistent weakness in EUR/CHF, could help push EUR/USD and EUR/JPY for downside range breakout.

UK PM May called off Brexit vote, will seek change in backstop with EU

Yesterday, UK Prime Minister Theresa May formally confirmed in the Commons that the Brexit vote will be delayed. She said, if Tuesday’s vote went ahead, it would be lost by a wide margin. May said she’ll hold emergency talks with EU to discuss possible changes to the backstop. And, she pledged that changes to the backstop would ensure it’s not permanent.

On second Brexit referendum, May warned that “this risks dividing the country again when as a House we should be striving to bring it back together”. And she added that ” if you want to stay part of the customs union, be honest that this this involves accepting free movement.” Or, “if you want to leave with no deal, be honest that this will cause significant damage in those parts of the county that can least afford it.”

EU Tusk: No Brexit deal renegotiation, including the backstop

UK Prime Minister Theresa May called off Tuesday’s Brexit parliamentary vote as her deal would be defeated by a wide margin. Instead, May is going back to the EU for adjustments in the deal, in particular on Irish border backstop. Response from EU is so far rather cold.

European Council president Donald Tusk tweeted that they will discuss Brexit at the Dec 13/14 scheduled EU meeting. But he emphasized that “we will