BTCUSD Bearish Outlook Does Not Change in Short and Long Term 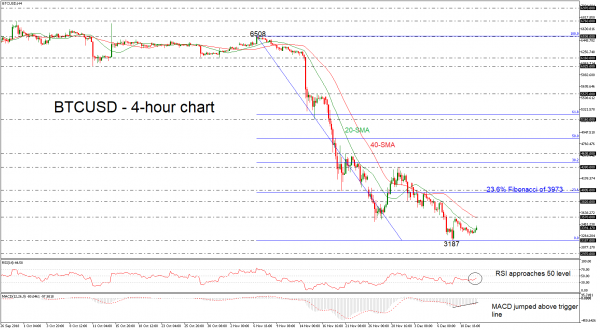 BTCUSD rebounded on the 15-month low of 3187 and is currently picking up speed above the 20-simple moving average (SMA) in the 4-hour chart.

The RSI turned higher but remains in the negative territory. At the moment, it continues to head higher in support of a slightly positive short-term picture. The bias in the very-short-term also looks bullish somewhat as indicated by the MACD, which holds above the trigger line.

Resistance could occur around the 40-simple moving average (SMA), which overlaps with the 3570 barrier. Higher still, the 3820 would increasingly come into scope, while not far above this point lies the 23.6% Fibonacci retracement level of the downleg from 6508 to 3187, around 3973.

On the downside, the bitcoin may meet immediate support at the multi-month low of 3187. If the market manages to drop below this level and bearish actions take place again, traders could look for next support at 2970.

To sum up, the short-term bias remains bearish especially after BTCUSD plunged below the 23.6% Fibonacci.