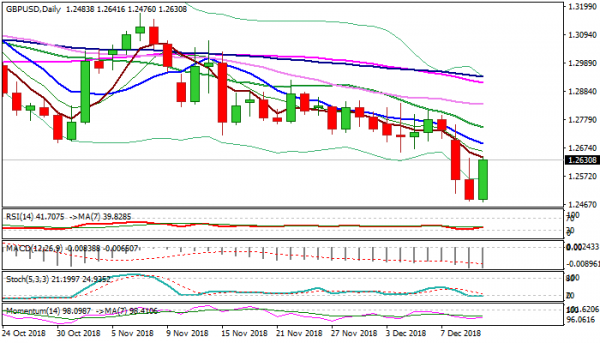 Sterling rose above 1.26 handle against dollar in early US session trading on Wednesday, driven by optimistic expectations that PM May will win confidence vote, triggered by conservative lawmakers and due later today. Political turmoil in the UK increased the pace after parliamentary vote on Brexit plan of PM May was postponed, with the latest news that she will be basically fighting for her job, adding to growing uncertainty. May said she would battle for her premiership with everything she had, as her opponents try to replace her by voting no confidence to the Prime Minister. The pound would advance if May passes today’s test and could test pivotal barriers at 1.2689 (falling 10SMA) and 1.2750 (20SMA), violation of which would generate fresh bullish signals. Negative scenario for sterling could be expected if PM May fails on today’s vote that could spark fresh bearish acceleration and expose key supports at 1.20 zone. If PM May loses her position, the political situation would become much more turbulent, as her successor would not have time for new negotiations, which could result in two scenarios: no-deal disorderly exit from the EU or possible new vote on Brexit, where the UK citizens would vote again whether the UK will leave the EU or will stay in the union. In any case, high volatility after the vote could be anticipated, regardless to the outcome. The results of today’s vote will be announced at 21:00GMT.