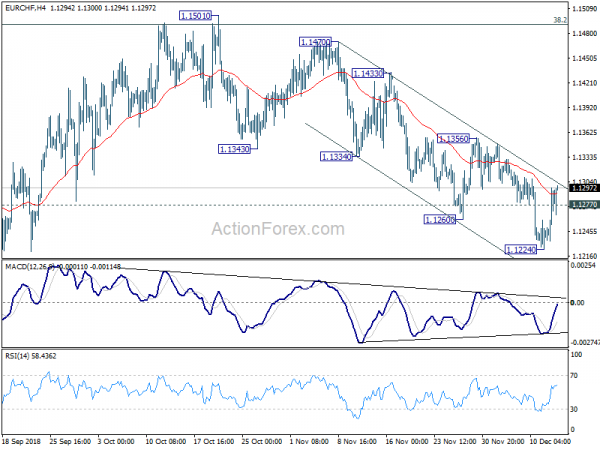 Risk sentiments are rather firm in Asian markets as major indices opened up and are extending gains. UK Prime Minister Theresa May’s survival of the leadership challenge is a positive factor. Also, progress and US-China trade talk is another factor. It’s reported that China has already purchased more than 1.5m tonnes of US soybeans this week, the first major purchase in six months. And of course there were reports that China is considering to lower auto tariffs from 40% to 15%. The WSJ also reported that China is working on replacing the “Made in China 2025” initiative with something that allows more foreign participations. Focus will now turn to SNB and then ECB rate decision. (for extra money in the currency market use our forex robot)

In the currency markets, Australian Dollar is so far the strongest one for today, followed by Dollar and then Euro. Yen is trading as the weakest one. Sterling follow as the second weakest as yesterday’s rebound fades. For the week, Aussie is the strongest one followed by Dollar. But with the exception of GBP/USD, all Dollar and Aussie pairs are limited below last week’s high, suggesting lack of follow through momentum. Sterling remains the worst performing one followed by Yen.

For traders: test results of our forex ea free or use our best Portfolio of forex robots for automated trading.
ECB to revise down growth and inflation forecasts, SNB to stay cautious

ECB is widely expected to keep benchmark interest rate unchanged at 0.00% today. And it should stick with the plan to end the asset purchase program after December. Nevertheless, there are prospects of some dovish shifts. As indicated by recent economic data, growth momentum in the Eurozone, in particular in Germany, has slowed down quite notably. Recent slump in oil prices would also put some downward pressure in the energy led headline inflation in the bloc. ECB is generally expected to revise down 2019 growth and inflation forecasts.

President Mario Draghi’s comments on the economy will also be watched. ECB has so far viewed the slowdown in second half as temporary. But policy makers could start to feel more uncertainty about that. In particular, the slowdown in global trade due to protectionism is starting to bite exports growth, most notably in Germany. But for now, we’re not expecting ECB to change the forward guidance of keeping interest rates at present level at least through summer of 2019. The forward guidance itself is flexible enough.

SNB is also widely expected to keep the Sight Deposit rate unchanged at -0.75%, with 3-month Libor target range held at -1.25 to -0.25%. Some traders might look for hints of a rate hike in 2019. But it’s rather unlikely. EUR/CHF ‘s uptrend topped at 1.2004 back in April, rejected by the key 1.2 handle. Subsequent events, including Iran sanctions, Italian elections and budget, Turkish Lira crisis, trade war, stock markets rout, etc, sent the cross back to below 1.15. Meanwhile, domestically, Swiss economy also contracted -0.2% in Q3. There is little room for SNB policy makers to move away from negative interest rate. Read our fundamental analysis…

Some suggested readings on ECB and SNB

Sterling softens mildly in Asia after UK Prime Minister Theresa May survived the leadership challenge. 200 Conservative MPs voted in support for May in the no-confidence vote. 117 voted against her. That’s way more than enough to secure her place as Prime Minister. But it’s still alarming than more than a third of the MPs of her party wanted her out. May herself also admitted that “a significant number of colleagues did cast a vote against me and I’ve listened to what they said”. But she added it’s time to “get on with the job of delivering Brexit for the British people”.

May will go to Brussels for the two day EU summit today. But she’s only given 10 mins to tell EU leaders what she needs to get the Brexit agreement through parliament. EU’s stance is very clear that the agreement itself is not renegotiable. But they’re open to offer “assurances” regarding the Irish border backstop, and others. The results of the summit could continue to trigger volatility in the pound.

Canada warns US not to politicize extradition, China urges Canada to distance from US hegemonism

Canadian Foreign Minister Chrystia Freeland warned the US (not China) not to politicize the arrest and extradition of Huawei top executive Meng Wanzhou. Trump said on Tuesday that he could intervene in the case if it’s good for trade negotiation with China. When asked about Trump’s comments, Freeland said “our extradition partners should not seek to politicize the extradition process or use it for ends other tha