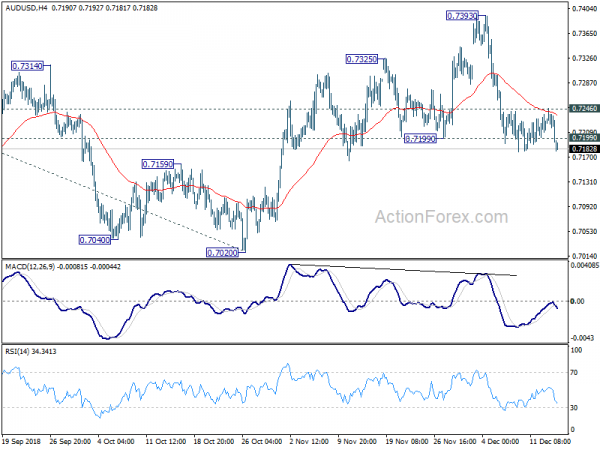 Asian stocks are under pressure today as weaker than expected data from China prompted growth worries. New Zealand and Australian Dollar are trading as the weakest ones for today. Sterling follows as the third weakest as UK Prime Minister Theresa May got nothing but vague assurances from the EU summit. On the other hand, Yen is lifted by risk aversion. Dollar follows as second strongest as focus turns to US retail sales. Euro is steady even though ECB delivered a mildly dovish shift yesterday.

Technically, AUD/USD’s is back below 0.7199 support. Sustained trading below will confirm near term reversal and target 0.7020 low. Euro remains mixed in range. EUR/GBP and EUR/AUD recovered well ahead of 0.8931 and 1.5596 support, thus maintaining near term bullishness. But EUR/USD and EUR/JPY are stuck in range, maintaining near term bearishness. A focus today is whether Sterling has completed this week’s recovery and would revisit near term low.

UK got vague assurances from EU over Irish backstop

The assurances that UK Prime Minister Theresa May got from the EU were rather vague and they unlikely to appease the MPs. But at the time same, it’s reported that May has been vague in her requests too. It caused some griefs from European Commission President Jean-Claude Juncker. He said at a press conference that “I do find it uncomfortable that there is an impression perhaps in the UK that it is for the EU to propose solutions”. And, “It is the UK leaving the EU. And I would have thought it was rather more up to the British Government to tell us exactly what they want.”

After yesterday’s EU summit, EU27 leaders concluded their positions on Brexit in a five point statement. Firstly, it’s “not open for renegotiation”. Secondly EU wishes to “establish as close as possible a partnership” with the UK in the future. Thirdly, the backstop is intended as an “insurance policy” to prevent hard Irish border. And EU has “firm determination to work speedily on a subsequent agreement” so that “the backstop will not need to be triggered”. Fourthly, if the backstop were triggered, “it would apply temporarily, unless and until it is superseded by a subsequent agreement that ensures that a hard border is avoided.” Fifthly, EU calls for preparedness for all possible Brexit outcome.

Economic data released from Japan today are not bad. Based on the results of the Tankan survey, it’s unlikely for BoJ to ease monetary further. Yet, it’s not time for the central bank to start stimulus exit too.

PMI manufacturing improved to 52.4, up from 52.2 and beat expectation of 52.3. Markit noted that “new order growth accelerates despite exports declining to sharpest extent in over two years”. However, “business confidence drops for seventh straight month to lowest since October 2016”.

Joe Hayes, Economist at IHS Markit, said in the release that “Japan’s manufacturing sector closed 2018 with a strong finish.” But the data also “bring some cautious undertones to the fore,”. In particular “Export orders declined at the fastest pace in over two years, while total demand picked up only modestly. Confidence also continued to fall, a seventh straight month in which this has now occurred.” He added “the prospects heading into 2019 ahead of the sales tax hike still appear skewed to the downside.”

Looking ahead, Eurozone PMIs will be the main focus in European session. US will release retail sales, industrial productions, PMIs and business inventories.