Week Ahead – Fed Decides as Pressure Grows to Pause Rate Hikes; BoE and BoJ Meet Too 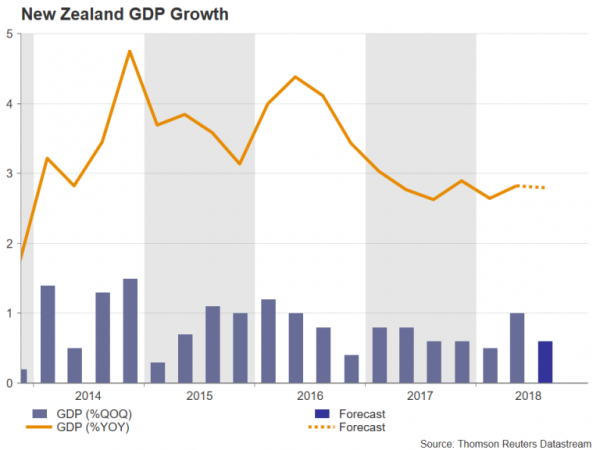 The Federal Reserve’s policy meeting will be the main attraction next week as speculation grows the US central bank could signal slowing down the pace of rate hikes. Policy meetings by the Bank of England and Bank of Japan are not expected to draw as much attention. Instead, economic data will be grabbing the headlines for the rest of the week as inflation, retail sales and GDP figures are due for a number of major markets, including, Canada, Japan, the United Kingdom and the United States.

Somewhat late to the Q3 GDP party, New Zealand will publish its estimates of growth on Thursday. Ahead of that, the ANZ business outlook index for December will be watched on Tuesday, as well as third quarter current account figures on Wednesday. More trade stats will follow on Thursday with the release of monthly export data for November.

New Zealand’s GDP probably grew by a solid 0.6% quarter-on-quarter rate in the three months to September as other indicators for the period were mostly positive. However, business confidence remains low and could undermine future growth prospects. Any disappointing aspect from next week’s numbers could therefore push back the expected timing of a rate hike by the RBNZ, which would be negative for the New Zealand dollar.

The kiwi recently scaled a near 6-month high on the back of improving risk sentiment. The Australian dollar was another currency benefiting from the positive market mood. However, a worse-than-expected growth performance in Q3 in Australia later led to a pullback from those gains. Investors will next be looking to Thursday’s November employment report for clues to how the economy is faring in the current quarter, with the aussie likely to be sensitive to any surprises in the figures. Australia’s unemployment rate is expected to have held steady at 5% in November. Prior to the jobs data though, the RBA’s minutes of the December policy meeting will fall under the limelight on Tuesday.

Sticking to commodity-linked currencies, the Canadian dollar could be sailing through some choppy seas next week as several key releases are due out of Canada. Starting the week are manufacturing sales for October on Tuesday, followed by November CPI figures on Wednesday, and retail sales and GDP numbers for October on Friday.

A positive trend from next week’s economic gauges could help the loonie move off recent 1½-year lows. The currency has been struggling after the Bank of Canada struck a dovish tone at its December meeting, while the very modest rebound in oil prices hasn’t done the loonie any favours either.

Will the Fed deliver a dovish hike?

The Fed will be the first of the major central banks to conclude its two-day monetary policy meeting on Wednesday. Federal Open Market Committee (FOMC) members are widely anticipated to raise the fed funds rate for the fourth time this year. But there has been rising speculation that the Fed is about to go into slower gear as fears mount of a global economic slowdown in 2019, with the recent slide in oil prices further dampening inflation expectations. Should the Fed forecast fewer rate increases in 2019 and also lower some of its growth and inflation projections, the US dollar could come under the firing line in forex markets.

Fed Chairman Jerome Powell will have to explain the central bank’s revised forecasts first to reporters, at the post-meeting press conference, and then to US lawmakers, at the Congressional testimony on Friday.

US data will also be watched next week with plenty of economic releases on the horizon. First up is the Empire State manufacturing index for December on Monday. On Tuesday, the focus will turn to the housing sector as building permits and housing starts for November are due, with existing home sales coming up on Wednesday.