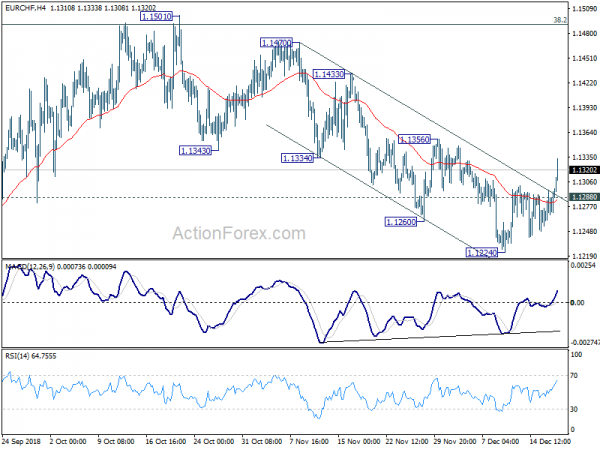 Technically, EUR/CHF’s strong rise today re-affirmed the case of near term bullish reversal. Focus will be on 1.1356 resistance next and break will pave the way back to 1.1501 resistance. EUR/AUD also strengthens notably and is eyeing 1.5887 resistance. Break will resume rebound from 1.5346 to 1.6 handle next. Otherwise, EUR/USD, GBP/USD USD/CHF and USD/JPY are staying in familiar range. (if you want to make money in the financial market use our  forex robot)

For traders: test results of our forex ea free or use our best Portfolio of forex robots for automated trading.
Dollar mixed as FOMC rate decisions awaited

US Dollar is mixed as markets await FOMC rate decision. In short, Fed is widely expected to raise federal funds rate by 25bps to 2.25-2.50% today. The question is on the rate path in 2019 after all the political pressures Fed policymakers faced. The new economic projections will provide the key guidance to market expectations. More on the projections here.

Also, here are some suggested readings on FOMC:

European Commission Vice-President Valdis Dombrovskis confirmed that an agreement is made with Italy regarding 2019 budget. He tweeted that “A lot of hard work and negotiation went into finding solution on the Italian budget. Let’s face it: the solution on the table is not ideal. But it allows us to avoid an Excessive Deficit Procedure at this stage, provided that the agreed measures are fully implemented.”

He added that “I hope this solution would also be the basis for balanced budgetary & economic policies in Italy. Italy urgently needs to restore confidence in its economy to ease financial conditions and support investment. Ultimately, this is what will support purchasing power of all Italians.”

Low level US and China officials clashed at WTO

Reuters reported that two rather low level US and China officials clashed at the WTO today in closed-door talks. US Ambassador to WTO Dennis Shea accused China of doing “outright steal” technology of the US and said “this is not acceptable”.

China’s envoy said US administration’s “reckless actions” were the root cause of the crisis in global multilateral trade system. And he hoped that both countries can “move in the same direction with mutual respect to contribute to the stability of world economic and trade environment”.

The Thomson Reuters/INSEAD Asian Business Sentiment Index rose to 63 in Q4, up from 58 in Q3 which was a near three year low. While readings above 50 still indicates a positive outlook, the result is still one of the lowest readings in years.

Antonio Fatas from INSEAD noted in the release that “this confirms the reading of the previous quarter: there is more uncertainty, there are increasing concerns about growth,” And, “this doesn’t mean there is going to be a crisis over the next quarters, but if there is one, this is an indication that it wouldn’t be a large surprise to some.”

Global trade war is, by some distance, the biggest perceived risks to business outlook. China slowdown and higher interest rates followed and then Brexit. The report also noted that, “the dispute between the world’s two biggest economies, threatens businesses throughout the region due to global value chains.”

EUR/CHF rises to as high as 1.1333 so far today as rebound from 1.1224 accelerates. Intraday bias remains on the upside for 1.1356 resistance first. Decisive break there should confirm near term reversal. In that case, further rally should be seen back to 1.1501 resistance. On the downside, below 1.1288 will turn bias neutral first. But retreat should be combined well above 1.1224 low to bring another rally.

In the bigger picture, price actions from 1.2004 medium term top is seen as a correction only. Downside should be contained by support zone of 1.1198 (2016 high) and 61.8% retracement of 1.0629 to 1.2004 at 1.1154 to complete it and bring rebound. A break of 1.2 key resistance is still expected in the medium term long term. However, sustained break of the mentioned support zone will mark reversal of the long term trend. In that case, 1.0629 key support will be back into focus.