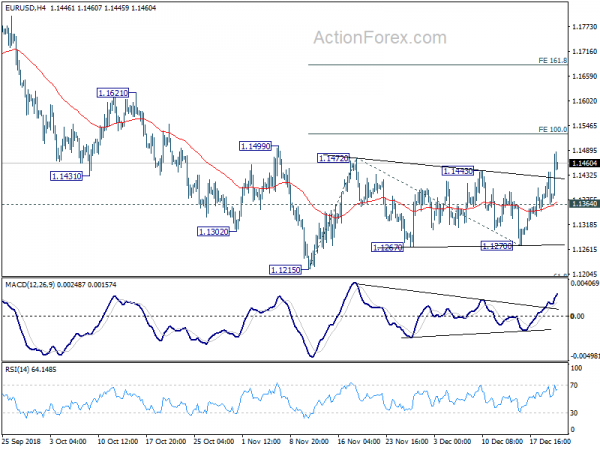 Dollar remains in the spotlight today as it suffers renewed selling in European session. It could be part of delayed reaction to the dovish FOMC rate hike yesterday. But then, while the greenback is the worst performing one today, loss greenback is limited so far except versus the Japanese Yen. Commodity currencies remain generally weakest ones for today and the week. Yen is currently trading as the strongest for today as risk aversion continues. Euro followed as second strongest. BoE and BoJ rate decisions today triggered little reactions.

Technically, most important development today is the break of 1.1443 resistance in EUR/USD. It firstly suggests resumption of rebound from 1.1215 low. Also, it’s an early signal of bullish reversal As long as 1.1364 minor support holds, further rally is now in favor back to 1.1814 key resistance. However, Dollar is only more bearish against Euro and Yen. Even USD/CHF recovers well ahead of 0.9848 key support. GBP/USD is held in tight range. AUD/USD stays near term bearish and USD/CAD remains near term bullish. More is needed to confirm underlying weakness of Dollar.

BOE voted 9-0 to leave the Bank rate unchanged at 0.75% in December. The committee also voted unanimously to leave the asset purchase program at 435B pound .It has turned more cautious than November, warning that Brexit uncertainty has “intensified considerably” since November. Thanks to lower oil prices, policymakers expect inflation to fall below +2% in as soon as January 2019. This should give more room for BOE in keeping interest rates on hold. More in BOE Turns Dovish as Brexit Deadline Nears, Yet No Deal is Secured

Yesterday, Fed raised federal funds rate by 25bps to 2.25-2.50% as widely expected. The decision was made by unanimous vote. The latest economic projections were rather dovish. 2019 growth and inflation forecast was revised down. Fed also projected few rate hikes ahead. More in:

MOFCOM: Both US and China took proactive measures on to resolve trade frictions, more talks in Jan

Chinese Commerce Ministry spokesman Gao Feng confirmed in a regular press briefing there were talks between China and US on trade yesterday. Both sides exchanged opinions on topics including balancing trade and intellectual property protection. Further than that, there are plans for more US-China trade talks in January. He said that both sides had maintained very close communications after Xi-Trump meeting earlier this month.

Also Gao hails that both sides took “proactive” measures on resolving trade conflicts and released “positive signals”. And he emphasized this is ” an important condition for the smooth progress of the consultations” on trade and economic frictions. Gao pointed to US formally suspended additional tariffs on Chinese imports till March 2. Also, China suspended additional tariffs on US autos still March 31.

BoJ left monetary policy unchanged today as widely expected. Short term policy rate is held negative at -0.1%. The central bank will continue with asset purchase at around JPY 80T a year to keep 10 year JGB yield at around 0%. The decision was again made by 7-2 vote. Y. Harada against said allowing long-term yields to move to some extent was too ambiguous. G. Kataoka continued to push for strengthen easing.

On economic outlook, BoJ said the economy is “likely to continue its moderate expansion”. Domestic demand is likely to follow an uptrend, “with a virtuous cycle from income to spending being maintained in both the corporate and household sectors”. CPI is “likely to increase gradually toward 2 percent, mainly on the back of the output gap remaining positive and medium- to long-term inflation expectations rising”.

BoJ Kuroda laid out options for additional easing if necessary