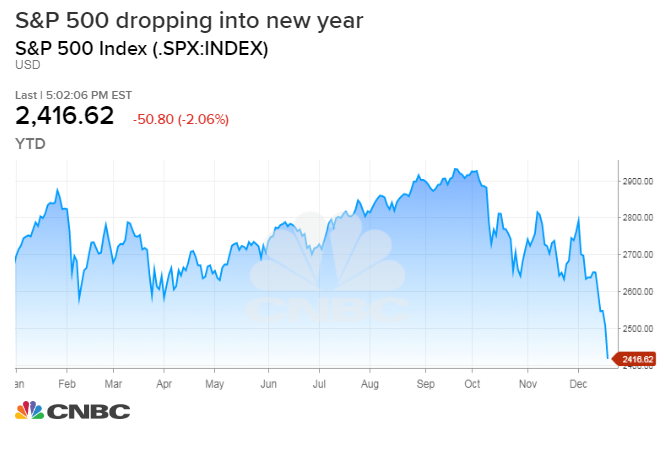 Stocks head into the final full trading week of the year on the brink of a bear market.

The Dow Jones Industrial Average plummeted in the past week in its worst performance since before the bull market began, in the very thick of the financial crisis in the fall of 2008.

While the market is seemingly oversold, strategists see little chance for any bounce in the week ahead, and the focus will remain on Washington’s fight over a government shutdown. Strategists say it may be too soon for investors to look for bargains among the rubble in what has traditionally been one of the quietest weeks of the year.

The Nasdaq Composite Index, dragged down by tech and biotech, was the first index to close in bear market territory, and is now 22 percent from its high. The Nasdaq lost 8.4 percent to 6,332 in the past week.

“Even if we do [get a Santa rally], it’s not going to be meaningful. It’s going to be super light volume, with a half trading day,” said Michael Arone, chief investment strategist at State Street Global Advisors. “Normally, this has been one of the strongest months of the year, but so far things in 2018 that normally have happened haven’t been happening.”

In a bad sign on Friday, volume was really heavy. More than 12 billion shares changed hands on U.S. exchanges on Friday, the biggest volume in at least two years.

The stock market closes after a half day on Monday, Christmas Eve, and is closed Tuesday.

December’s performance is nearly the worst on record for the month, with the Dow’s decline of 12 percent the worst since 1931. December is typically a good time of year for stocks, and this December is on track to be the worst month of the year for the first time ever.

“I would imagine trading activity is going to slow down quite a bit,” said Mark Cabana, head of U.S. short rate strategy at Bank of America Merrill Lynch. “Overall, I think the focus is going to be on getting things tied up ahead of year’s end. It’s possible there could be some outsized moves given reduced liquidity. I think there’s going to be a lot of focus on getting a fresh start next year.”

Technical analysts say the market continues to look weak, with many stocks in bear market territory already and trading well below their 200-day moving averages.

“The measured move was reached faster and more furious than most people thought,” said Scott Redler of T3Live.com. “It doesn’t seem like anyone wants to step in the way of the headlines that are piling up. And why would they? The next level traders would like to see tested is 2,250 to 2,300.”

A negative chart formation that emerged last week, known as a head-and-shoulders formation, points to a level of 2,300 in the S&P 500.

“Buyers are just sitting back and instead of playing an oversold bounce, they’re just waiting,” he said. “Anybody’s that tried to position for a Santa rally has been absolutely run over. The calendar issues have been all off.”

Hanging over the market in the week ahead are the government shutdown fight, which pits the president against Democrats in Congress, over his plan for a border wall. There was a glimmer of hope late on Friday that a deal could be hatched, with Sen. Bob Corker saying a path forward was being discussed.

While traders said there was not much concern about the partial shutdown, a bigger worry was the fighting that could become the norm once Democrats have control of the House in January.

“It does seem like it’s weighing on sentiment. It’s more a signal about just how difficult things will ultimately be. It enhances expectations for gridlock in the future,” said Cabana.

The Fed this past week was viewed as a major catalyst for the sell-off, after it released a forecast for more rate hikes at the same time it sees a slower growing economy.

That sparked concerns that the Fed was heading for a policy mistake, and comments from Fed Chairman Jerome Powell that the Fed’s balance sheet rolldown was on “autopilot” really spooked traders.

But on Friday, New York Fed President John Williams kicked off a brief stock market rally when he told CNBC the Fed is willing to reconsider its policy depending on the economy and conditions. His comment was not unlike Powell’s, but traders said he sounded more flexible and sensitive to market conditions.

Strategists point to a few big concerns for the markets heading into next year — the most worrisome being trade and the Fed.