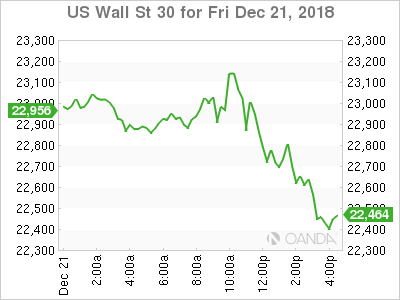 What a week for bears and volatility! The highly anticipated Fed event delivered volatility that brought down all the major indexes to their knees. The Fed raised rates, reduced their dot plot forecasts, but they signaled that quantitative tightening is on automatic pilot. Stocks dropped and safe-haven assets soared as concerns of tighter liquidity and a partial government shutdown dashed hopes for a Santa rally. With Fed officials lowering their inflation outlook, global growth concerns driving recession worries, expectations for future rate increases and optimism for the US economy are dwindling. For risk appetite to return, we may need to see the Fed talk back the hawkishness.

This month, weakness in equities has either come from trade war fears, anemic economic data outside the US, lack of dovish assurances from the Fed, a partial government shutdown, lower oil prices and recession concerns. As we approach holiday trading conditions, some investors are keeping to the sidelines and waiting to see if the bearish momentum continues in January. Both the Dow Jones Industrial Average and S&P 500 are on pace for their worst December performance since the Great Depression.

The collapse in oil is starting to make US shale producers reduce their spending. Some companies have shutdown rigs and reduced their fracking crews, but in order for oil to stabilize, we will need to see US producers significantly reign in their output. The oil production cuts from OPEC and the reductions we are seeing in shale are currently modest at best. If we continue to see slower economic growth that will weigh on demand and make it difficult for oil to stabilize

We are well under 100 days until the Brexit deadline and PM May appears to be trying to run out the clock before pushing her Brexit deal through Parliament. The House of Commons recess is from December 20th to January 7th and the Prime Minister is hoping she can retain as many senior ministers before talks intensify next month. The vote is expected on the week of January 14th and depending on how much she loses that vote by could determine what we see next. If we see a motion of no confidence in the government that could bring about an early general election if it is supported by a majority of MPs. The scenarios remain plentiful on how Brexit will turn out, but the ultimate resolution of a soft-Brexit is still being seen with cable.

The trade war is hurting China and top policymakers this week signaled they will provide more support to the economy with tax cut and other policy measures. The 90-day tariff truce made between President Xi and President Trump ends on March 1st and if we don’t see more significant progress we could see the yuan continue to fall along with equities. Trump is adamant that China open their markets to the US, address intellectual property theft and forced technology transfer, and narrow the trade deficit. We may not see the final framework for a deal by the ceasefire deadline, but if we see progress, we could see that elevate risk appetite.