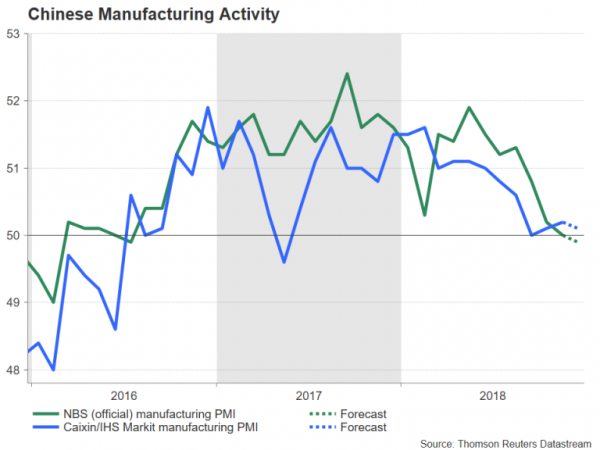 PMI gauges out of China will be one of the few highlights in a light economic calendar next week. The NBS manufacturing PMI is released first on Monday at 01:00 GMT, with the Caixin/IHS Markit manufacturing PMI following on Wednesday at 01:45 GMT. Expectations aren’t high for either indicators of factory activity as China’s economy continues to lose steam from structural reforms such as deleveraging as well as of course the trade war with the United States.

The official NBS manufacturing PMI, which mostly covers large and state-owned enterprises, is anticipated to slip below the 50 level that separates expansion from contraction for the first time since July 2016. It is expected to fall from 50.0 to 49.9 in December. The NBS non-manufacturing PMI is also due on Monday, though this tends to attract less attention.


Turning to the Caixin/IHS Markit manufacturing PMI, the index is forecast to decline from 50.2 to 50.1 in December, eking out meagre growth at the end of 2018. If confirmed, this would suggest the private small- and medium-sized companies, which make up the Caixin/IHS Markit survey, are faring somewhat better than their larger counterparts, but only marginally.

Worse-than-expected figures in the manufacturing PMIs could deepen the risk-off sentiment currently prevailing over the markets as they would fuel concerns about a sharp slowdown in the world’s second largest economy. On the bright side though, disappointing PMI numbers would likely prompt Chinese authorities to announce further stimulus measures over the coming months to boost growth and avoid a deep downturn. Policymakers have in recent months stepped up measures to support the economy in a bid to counter the negative impact from tougher US trade restrictions.

In forex markets, the Australian dollar is likely to see the biggest response to the data, as it often serves as a liquid proxy for the Chinese yuan. The aussie could breach its immediate support in the $0.7015-0.7020 region from any misses in the PMIs, as well as from any fresh market turbulence. If this happens, the next support could come around $0.7030 – the 123.6% Fibonacci extension of the upleg from $0.7018 to $0.7393. Lower down, the aussie could stall at the 138.2% Fibonacci at $0.6875.

On the other hand, a stronger set of PMIs than what is being projected by analysts could provide the aussie with a bit of a lift, especially if this week’s rebound in global equities broadens to positive risk sentiment in the wider markets in the coming days. The aussie could initially target the 50-period moving average in the 4-hour chart around $0.7080 before aiming for the $0.71 handle, which is just above the 78.6% Fibonacci retracement level. Higher up, the focus would turn to the 61.8% Fibonacci retracement at $0.7161.