Week ahead – US Employment Report to Kick off the New Year 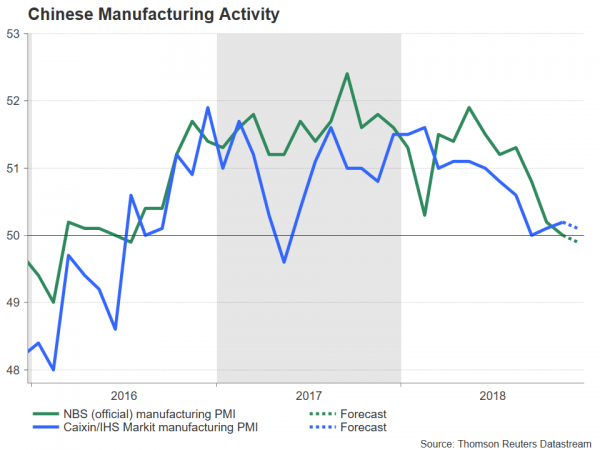 After a particularly turbulent week that lacked fresh catalysts but not wild price swings, traders will now turn their sights back to more familiar themes, such as economic data releases, and most notably the US jobs report for December. That doesn’t mean everything is back to normal though, as liquidity will likely remain thin, which implies that any piece of news could have a disproportionally large market impact.

The week will commence with China’s official manufacturing and non-manufacturing PMIs for December, which are due during the Asian session on Monday. The manufacturing index is projected to drop to 49.9 from 50.0 previously, which would officially bring it into contractionary territory. The Caixin/IHS Markit will follow on Wednesday and is also forecast to have weakened in December.

Such prints could add further fuel to the narrative that global growth is set to slow down in 2019 and thus, besides impacting the yuan and the China-sensitive Australian dollar, may also amplify the broader risk aversion seen in markets lately.

The highlight on the US economic calendar will most probably be the employment report for December, due out on Friday. Nonfarm payrolls are forecast to have risen by 178k, a print consistent with further tightening in the labor market, while the unemployment rate is projected to have held steady at 3.7%, its lowest level since the early 1970’s. As per usual though, the lion’s share of attention may fall on wage growth, which is expected to cool to a 3.0% yearly rate after accelerating to a decade-high of 3.1% in the previous month.

The question is whether such figures will be enough to alter the dovish expectations around the Fed, which according to market pricing, is not expected to touch the hiking button at all next year. Investors seem confident that the latest housing market slowdown will spill over into slower growth in the broader economy soon, keeping the Fed away from hiking. In this sense, it will be interesting to hear what Fed Chair Powell has to say when he participates in a panel discussion in Atlanta on Friday, and whether he will acknowledge the massive divergence between what his central bank signaled recently (two hikes in 2019), and what markets expect. Finally, the ISM manufacturing PMI for December is also due a day earlier, on Thursday.

Staying in North America, Canada will see the release of its own jobs data for December on Friday. Forecasts point to a somewhat soft report, though that may not be particularly alarming considering how strong November’s figures were.

Across the Atlantic Ocean, the UK will be on the receiving end of its Markit PMIs for December. The manufacturing index is due out on Wednesday, the construction one on Thursday, and the all-important services print on Friday. Although these are typically tier-one releases, do note that economic data in general may not have much of an impact on the pound amid heightened Brexit uncertainties. The rationale is that even if the economy is robust, the BoE probably won’t hike rates and may in fact cut them under a no-deal Brexit. Hence, politics will probably continue to overshadow economics in driving sterling, with market attention likely to shift back to “all things Brexit” when the UK Parliament returns from holidays, on January 7.

Meanwhile, the Eurozone’s preliminary inflation data for December will be made public on Friday. Expectations are for the headline rate to tick down to 1.8% in yearly terms from 1.9% previously, but for the core rate that excludes fresh food and energy to inch up to 1.2%, from 1.1% in November.

If so, these would be good news overall for the ECB, which usually pays more attention to metrics of underlying inflation. The bloc’s economy has been losing momentum in recent months, and a pickup in core inflation could go a long way in making policymakers more confident to continue their normalization efforts.