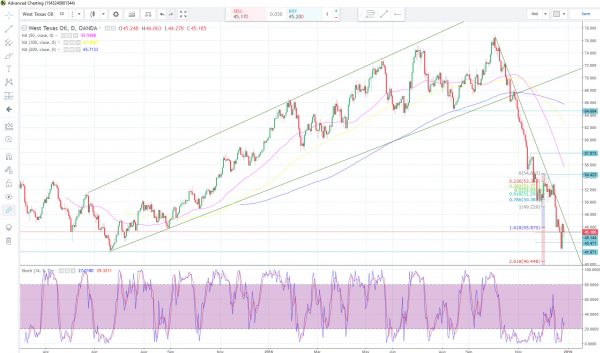 Oil prices climbed higher after the weekly DOE crude inventories fell by 46,000 barrels last week, the market consensus was for a decline of 2.5 million barrels. The reason oil prices edged higher on a smaller draw, was because yesterday, the weekly API oil inventories rose by 6.9 million barrels, up from a build of 3.5 million in the prior month.

The Canadian dollar still remains near its 19-month lows against the greenback and has yet to show a significant recovery along with oil prices.

Price action on the West Texas Intermediate (WTI) crude daily chart shows key low of $42.36 is still holding and price is in the middle of this week’s trading range. Volumes remain light and it is become less likely a major move will occur until the New Year. The $40 level remains critical support for WTI and it could happen if we see another major wave of risk aversion. To the upside, $48.00 could provide initial resistance.