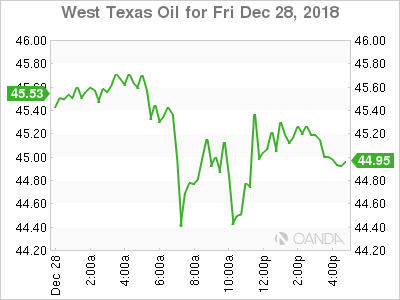 Dollar bulls have wined and dined like kings and queens in 2018.  The greenback appreciated the most against the emerging market currencies.  The earlier part of the year saw the focus on rising US interest rates and political stories lead the way lower for EM.  Trade wars also contributed to the risk-off narrative and will likely be a key area of focus in Q1.

Volatility was the story for Q4 as some of the major indexes fell over 20%.  The panic that hit the markets saw safe-haven currencies surge on market uncertainty regarding trade wars, Fed quantitative tightening (QT), a partial government shutdown in the US, and Brexit worries.  While the data in the US has been softer, many parts of the economy are still strong, such as record-low unemployment and near 3.0% GDP growth.  With many risk events in play for the first quarter, we could see Fed policy remain on hold until the latter part of the year.  If the Fed pauses interest rate increases and signals a goal on when QT will stabilize, we could see some headwinds for the US dollar in the first half of the year.

Will the Oil bottom hold?

Thin volumes supported the Christmas Eve oil collapse to $42.36 and everyone will closely watch to see if that level holds.  While most analysts expect oil to be higher by the end of 2019, the fundamental concerns on both the supply and demand side could see the meltdown continue.  In January, we may hear more talks of extending cuts from OPEC+, US offshore drilling companies may need to scale back operations if oil stays near current levels, and if we see a framework agreement on the trade spat between the US and China, we could see positive sentiment return to the battered commodity.

We are well under 90 days until the Brexit deadline and no one wants to trade sterling because no one has a clue how Brexit will play out.  The expectations are still slightly for a soft Brexit, but money managers are not ready just yet to place their bets.  A hard exit is still a possibility and that is preventing most long-term bullish bets from just being placed.  PM May appears poised to lose the vote in Parliament on the week of January 14th.  After the vote, we could see Jeremy Corbyn deliver on his threat of a no confidence motion on the government, which could lead to a general election.  The House of Commons recess ends on January 7th, but we could see the MPs called back earlier.  The smart money remains on the sidelines as the scenarios on how this will evolve remain plentiful.  We should start to see some positioning after the Parliament vote.

US Treasury yields continue to slide as the 10-year yield fell to the lowest level since February.  The 10-year and 2-year gap widened to 19.85 basis points alleviating concerns that the Fed’s tightening process would invert the yield curve.  All eyes will be on Fed Chair Powell’s January 4th interview at the annual meeting of the American Economic Association in Atlanta.  The market does not agree with the Fed’s dot plot and seeks clarity on quantitative tightening, so every event Powell attends will be closely watched for further dovish commitments.