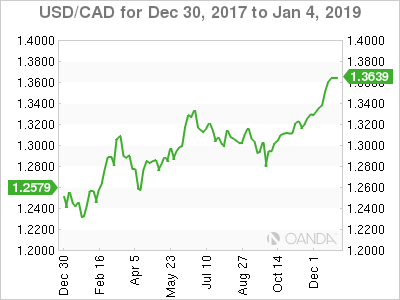 It was a brutal year for the Canadian dollar, as the commodity currency plunged 7.6 percent. The currency started the year in promising fashion, posting gains of 2.1 percent in January. However, the currency slid in February, falling 4.2 percent. After trading in a narrow range for most of the second and third quarters, the Canadian dollar has struggled in Q4, dropping 5.6 percent.


I am bearish on the Canadian dollar

Tumultuous equity markets have led to increased risk apprehension, as jittery investors have flocked to safe-haven assets, at the expense of minor currencies like the Canadian dollar. USD/CAD has posted six straight losing weeks. The December slide was punctuated only by the Christmas holidays, with investors taking some time off. The global trade war, which has resulted in more tariffs on Canadian exports, will continue to hamper the Canadian economy. However, this stark situation could quickly change if the U.S. and China come to an agreement on trade issues which have led to tit-for-tat tariffs between the world’s largest two economies.