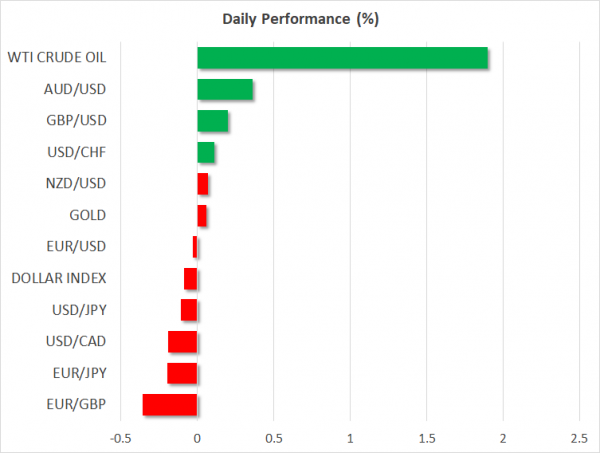 Investors will have their last full trading day on New Year’s Eve Monday before closing their books for 2018 and futures tracking US stock indices such as the S&P 500 and Dow Jones are flashing green, pointing to a positive open thanks to optimistic trade tweets by the US President. However, equities in Asia, were mixed, with Chinese stocks heading higher, while the dollar did not react much, holding near Friday’s lows.

On Saturday, Donald Trump tweeted that he had “a long and very good call” with the Chinese leader, Xi Jinping and that “big progress” could be made in the trade drama which has kept markets under pressure this year. The risk-sensitive aussie was among the best performers early on Monday, while the safe-haven yen was weaker as the news boosted confidence in the markets. Yet sentiment could be better if there was more clarity on how both sides could achieve the ideal trade agreement, with investors maintaining their skepticism that the confrontation could be a prolonged one before a formal decision is taken. On the other hand, the poor performance of Chinese economic indicators suggests that Beijing may soften its demands to avoid a financial slowdown. It’s also worth noting that trade talks are expected to resume in Beijing in the week starting January 7th.

Developments in the monetary front form another puzzle that will feed uncertainty in 2019 as questions remain about whether the Fed will finally keep their pledge to deliver two rate hikes next year at a time when stocks are set for their worst annual close since 2008 and fears about a potential slowdown in global economy continue to loom in the background.

Italy puts its row with the EU to rest

Meanwhile in Italy, the Parliament backed the revised budget plan for 2019 which aims for a deficit target of 2.04% of GDP instead of 2.4% initially proposed, terminating the clash with Brussels before today’s deadline. The euro however which is set for a yearly loss after an impressive rally in 2017 did not gain much on the news as investors are interested to see whether the spending goals are achievable in practice, fearing that any failure could force the collapse of the coalition government. Particularly political tensions could intensify ahead of the European Parliamentary elections in May as Salvini and Di Maio will be competing each against each other to win first place for their respective parties.

Besides Italy, the EU will be also monitoring Brexit progress. In case Britain exits the bloc without a deal, disastrous consequences are anticipated to follow not only in the UK but also in Europe, pushing funds away from the euro.

Oil soars but set to close lower after three years

Crude prices were overwhelmingly recovering early in the European session, winning support from trade optimism, with WTI crude and Brent gaining near 2.0% in the day. Still the markets are due to experience their first yearly decline after three years of gains amid fears of a supply glut and concerns that a potential slowdown in oil-consuming countries such as China could weigh significantly on demand for crude.