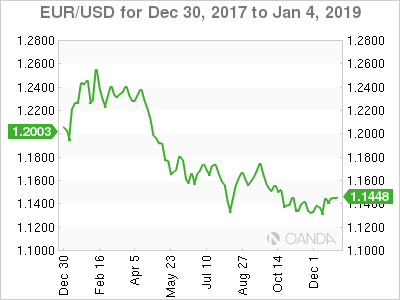 Looking back at 2018, EUR/USD slipped 4.5% against the euro. The pair started the year at the 1.20 level and posted gains over 3 percent in January, but it’s been pretty much downhill since then for the euro. However, the euro has gained 1.0% in December, despite the turmoil which has gripped the equity markets in recent weeks.

As we welcome 2019, here are some items the markets will be closely following:

A partial shutdown of the U.S. government has entered its second week, with no resolution in sight. President Trump has insisted that a spending bill include some $5 billion for a wall on the Mexican border, but Democrats in the Senate have blocked the bill. The impasse will continue into 2019 and will cost the taxpayer billions of dollars. Previous shutdowns have been resolved within a few weeks, as politicians are wary to drag out the fight and risk the wrath of voters for the lack of government services. The U.S. dollar will be under pressure while the shutdown continues.

The ongoing global trade war has shaken global equity markets and dampened the global economy. China and the U.S. have slapped tariffs on each other’s products, and the U.S. has threatened to raise the tariffs on Chinese goods from 10 percent to 25 percent on March 1. However, President Trump has agreed to suspend the tariffs while talks are ongoing, and U.S. and Chinese teams are slated to meet this week. If Trump can pull off a deal with the Chinese, the U.S. dollar could respond with gains against the euro.