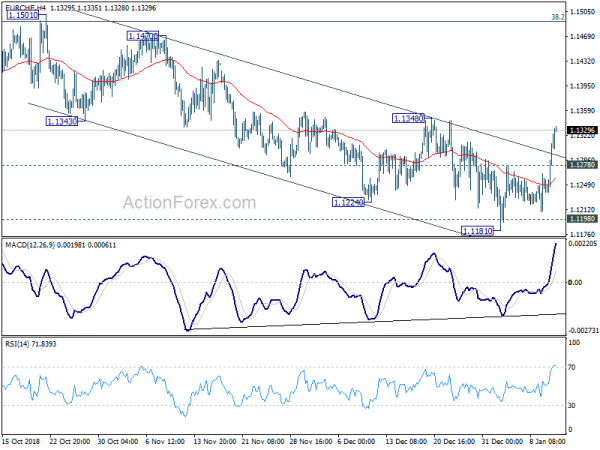 Dollar continues to trade as the weakest one for today and the week. The chorus of Fed’s “patience” rhetoric continued overnight with the top two men in Chair Jerome Powell and Vice Chair Richard Clarida. But the marginal impact in the markets seem to be diminishing. Stocks were just mildly lifted while there is no extended selloff in the greenback. Dollar will now look into today’s CPI data for the needed stimulation for a rebound. Staying in the currency markets, Yen is following as the second weakest, then Sterling. Commodity currencies are generally higher, led by Australian Dollar today.

Technically, one notable development is the strong rebound in EUR/CHF this week. Trading at 1.1339, focus is immediately on 1.1348 resistance. Break will confirm near term reversal after drawing support from 1.1173 low. And that should pave the way back to 1.1501 resistance. It should be about time Yen crosses finish the post flash crash rebound. USD/JPY seems to have taken the lead. EUR/JPY and GBP/JPY also continued to lose upside momentum. We’ll see if there is revival of Yen strength before weekly close.

Powell: Fed will be waiting and watching patiently

Fed Chair Jerome Powell echoed other Fed officials’ comments and said yesterday that policymakers can be patient on next rate move. And Fed will be “waiting and watching” in the coming months.

Powell said at the Economic Club of Washington that “Especially with inflation low and under control, we have the ability to be patient and watch patiently and carefully as we … figure out which of these two narratives is going to be the story of 2019”. He referred to the risks of overheating and slowdown. Though, he maintained that Fed will continue to shrink the balance sheet to a “substantially smaller” level.

Powell also emphasized that the federal funds rate projections are not plan. He said “there is no such plan” and “that was conditional on a very strong outlook for 2019”. He added “there is no pre-set path for rates” and “we can flexibly and quickly move policy, and we can do so significantly if that’s appropriate.”

Fed Clarida: Patience is a virtue we can today afford

Fed Vice Chair Richard Clarida said “we can afford to be patient about assessing how to adjust our policy stance to achieve and sustain our dual-mandate objectives”. He noted the Fed begins 2019 “as close to our assigned objectives (price stability and full employment) as we have in a very long time”. Thus, “patience is a virtue and is one we can today afford.”

Clarida also warned that “recent developments in the global economy and financial markets represent crosswinds to the U.S. economy”. And, ” If these crosswinds are sustained, appropriate forward‑looking monetary policy should seek to offset them”. Fed needs to be ” cognizant of the balance we must strike between (1) being forward looking and preemptive and (2) maximizing the odds of being right.”

Bullard: Fed is on the precipice of a policy mistake

St. Louis Fed President James Bullard said bluntly that Fed has come to the “end of the road” on the current rate hike cycle. He warned that “I am concerned we are on the precipice of a policy mistake”. And, “what I don’t want to do is project that further increases are needed, that we are somehow short of our goal.”

Bullard also urged that Fed should listen to the markets more carefully and seriously. He added “the market’s almost always right in that situation, and it’s the Fed that’s been wrong.” He criticized the December rate hike as a “overreach” which he argued against. But back then, he didn’t have a vote on the FOMC. Bullard is a voter this year.

US-China trade negotiation is set to set up to top level talks later in January. US Treasury Secretary Steven Mnuchin said Chinese Vice Premier Liu He will most likely visit Washington later in the month.

He told reports that “The current intent is that the Vice Premier Liu He will most likely come and visit us later in the month and I would expect the government shutdown would have no impact,” And, “we will continue with those meetings just as we sent a delegation to China.”

Trump also said yesterday that “we’re negotiating and having tremendous success with China.” Also, “I think that China is actually much easier to deal with than the opposition party”. Trump related to the deadlock he is having with the Democrat on the border wall.

UK CBI Director-General Carolyn Fairbairn is going to want the government that no-deal Brexit could cause -8% decline in GDP, in a speech today.

In an article at CBI’s website, Fairbairn talked about the “dangers” of no-deal Brexit. She warned that “The economic consequences would be profound, widespread and lasting. GDP would decline by up to 8%, meaning less money for our public services and those who rely on them.”

There would be “new costs and tariffs” and ports would be “disrupted”. Trade deals with countries like Japan, South Korea and Turkey would be “lost”. Services sector would be “at a sharp disadvantage”.

In short, She said “no-deal cannot be managed”. On next week’s vote in the parliament, she said “”And next week, they face a test. If they meet it with yet more brinkmanship, the whole country could face a no-deal, disorderly Brexit.

NOTE: You can not find the right trading strategy? if you have no time to study all the tools of the trade and you have not funds for errors and losses – trade with the help of our Keltner channel forex robot developed by our professionals. Also you can testing in Metatrader our forex scalping robot free download .

UK data will be a major focus today. November GDP, productions and trade balance will be featured. But the key to Sterling’s fate lies in next week’s Brexit meaningful vote, as well as the subsequent plan B when it’s voted down.

Later in the day, US CPI will take center stage. Inflation data is the key factor to revive Dollar strength.

EUR/CHF rises to as high as 1.1335 so far as rebound from 1.1181 extends. The break of near term channel resistance is a sign of bullish reversal. Intraday bias is mildly on the upside for 1.1348 resistance first. Break will confirm completion of whole decline from 1.1501 and should target retesting this resistance. On the downside, break of 1.1278 will turn bias neutral again. Overall, in case of another fall, we’d expect strong support from 1.1154/98 support zone to contain downside to bring reversal.

In the bigger picture, price actions from 1.2004 medium term top is seen as a correction only. Downside should be contained by support zone of 1.1198 (2016 high) and 61.8% retracement of 1.0629 to 1.2004 at 1.1154 to complete it and bring rebound. A break of 1.2 key resistance is still expected in the medium term long term. However, sustained break of the mentioned support zone will mark reversal of the long term trend. In that case, 1.0629 key support will be back into focus. Use our Portfolio of forex robots reviews…

Previous: USD/JPY Facing Significant Hurdles Near 108.80
Next: Here’s how lost furloughed federal worker paychecks could weigh on the US economy