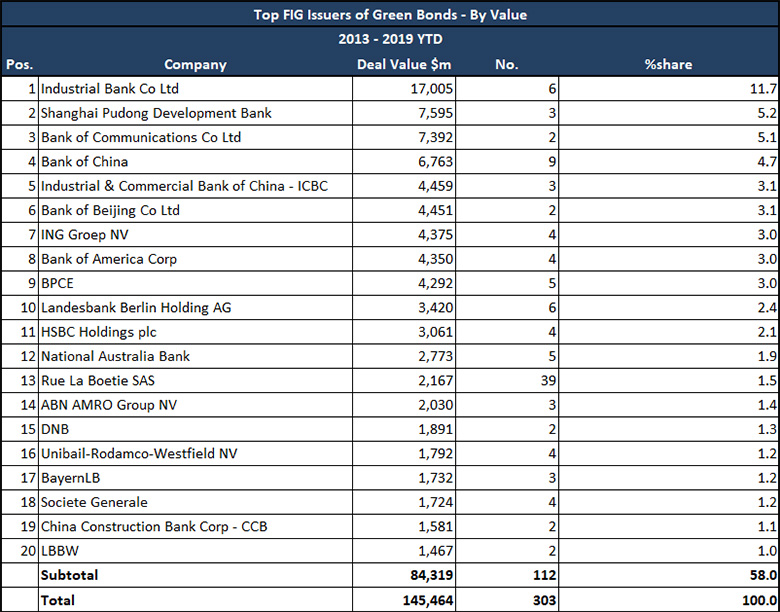 The bond was larger than anticipated, and oversubscribed, pricing at mid-swaps +58 basis points – in from the initial +75bp area.

“The centre of gravity for investor interest in green bond structures is tilted towards Europe, reflected by the dominance of euro-denominated issuance of green bonds so far,” he says.

Within that investor base, it is mainstream institutional investors that are leading the way, adds Brown.

Chinese banks have dominated green bond issuance during the past six years, according to data from Dealogic:

Industrial Bank has issued $17 billion in green bonds since the beginning of 2013, with a market share of 11.7%. However, Bank of China has issued the most of any Chinese bank – nine in total.

Bank of America has issued four green bonds since the beginning of 2013 – $4.35 billion in total.

Citi’s move has been long expected.

In 2016, when BAML and MS had already taken the plunge, it was surprising that Citi did not follow suit.

Indeed, now that Citi has joined the largest US banks as an issuer, and not just a manager, one wonders if JPMorgan and perhaps Wells Fargo, which have been noticeably absent from issuing their own green bonds, will finally get on board.