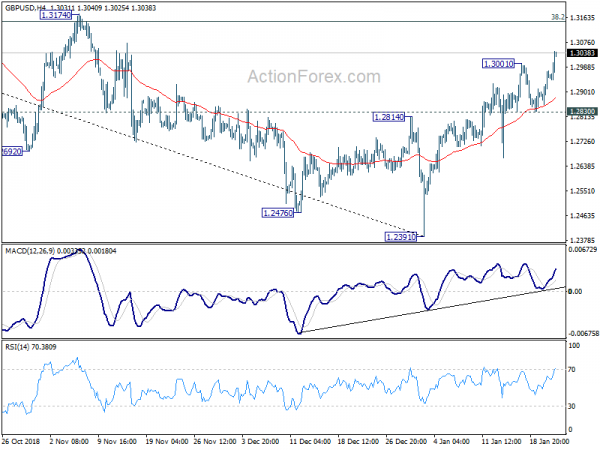 Sterling is the star performer today as campaign to block no-deal Brexit in the UK gathers momentum. Some upside acceleration is seen after the Pound takes out near term resistance against Dollar, Euro and Yen. New Zealand Dollar is following as the second strongest as boosted by stronger than expected CPI. Though, it handed the top spot to the Pound in early US session. On other hand, as risk sentiments stabilized, Yen is trading as the weakest one, followed by Swiss Franc. Canadian Dollar turns softer after weaker than expected retail sales. But loss in the Loonie is so far limited.

The campaign to block a no-deal Brexit in the parliament is gaining momentum today. Labour lawmaker Yvette Cooper put an cross-party supported amendment proposal earlier, to try to impose a deadline of February 26 for Prime Minister Theresa May to get the Brexit deal approved by the parliament. Otherwise, there would be a parliamentary vote on delaying Brexit. The second most influential Labour member John McDonnell said today the party is “highly likely” to back Cooper’s amendment. He added “Yvette Cooper has put an amendment down which I think is sensible”.

However, UK Prime Minister Theresa May criticized that “What we have seen is amendments seeking to engineer a situation where Article 50 is extended – that does not solve the issue, there will always be a point of decision. The decision remains the same: no deal, a deal or no Brexit”.

Regarding no-deal Brexit, Moody’s senior vice president Sarah Carlson warned that “from a sovereign credit perspective, if you end up with a ‘no deal’ Brexit that is a sign that something institutionally has really quite profoundly failed.” And, that would weigh negatively on UK’s creditworthiness.

EU Moscovici: Brexit has to be dealt with in London first

European Commissioner for Economic and Financial Affairs Pierre Moscovici reiterated the EU’s stance that regarding Brexit, the ball is in UK’s court now. He said “Certainly the EU is there, the EU is waiting, the EU is ready but first we need to know clearly what are the British intentions and we need some clarifications from London”.

He added that “Of course the door is always open for discussion but it’s not up to us to tell now the British side where it wants to go. The ball clearly is in the British side again. It’s not a problem that can be solved by Brussels, maybe in Brussels later, but it has to be first dealt with in London.”

The short term interest rate is held unchanged at -0.1%. And under the yield curve control frame work, BoJ will continue to kept 10-year JGB yield at around 0%, with some upward and downward movements allowed. The annual amount of JGB purchase will be kept at JPY 80T.

Member G. Katakoa dissented as usual, pushing to strengthen monetary easing. Y Harada also dissented again, criticizing that allowing the long-term yields to move upward and downward to some extent was too ambiguous

On economy, BoJ maintained that “Japan’s economy is likely to continue on an expanding trend through fiscal 2020.” Also, “overseas economies are expected to continue growing firmly on the whole, although various developments of late warrant attention such as the trade friction between the United States and China.”

In the new GDP projections, comparing with October forecasts: