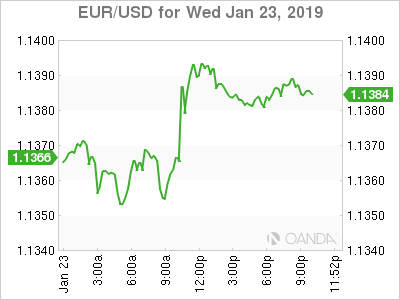 The US dollar is weaker against major pairs on Wednesday. The prolonged government shutdown and lack of clarity on trade talks put downward pressure on the greenback while investors sought higher yields as risk appetite was back in action. The US dollar and the Japanese Yen fell as a result of the risk on factor. The European Central Bank (ECB) will publish its main refinancing rate at 7:45 am EST, with no changes expected, the major event of the day will be the press conference by President Mario Draghi at 8:30 am EST, where investors can get some insights into how much has the events of the month and half have changed the view on European monetary policy.

Euro Rises Ahead of ECB Despite Dovish Outlook

The EUR/USD rose on Wednesday as the government shutdown continues, putting pressure on the greenback. The news out of Europe have been mixed with weaker growth and inflation, but on the bright side there has been some progress on the Brexit talks. The single currency is trading at 1.1383 ahead of Mario Draghi’s press conference. The challenge for the central banker will be on what to say, and more importantly given the miscommunication in the past, how he delivers.

The ECB was expected to hike rates in the fall of 2019, but that could now be an optimistic forecast. With no updated projections the only outlook would be the one Draghi gives the market so he better be careful to avoid spooking already sensible investors.

European growth remains elusive, and harder to achieve in a protectionist environment. The statement out of Davos have said as much, but real change will not happen abroad but when those leaders return home to do the hard work. Draghi will not enjoy the spotlight on Thursday as he has little good news for the market, and will work on how to best deliver the bad news.

Sterling surged 0.86 percent as Labour could be onboard with passing legislation to delay Brexit. Extending the fast approaching March 29 deadline and minimizing the probability of a no-deal exit have been positive for the currency. The pound will continue to be sensitive to developments in parliament as Theresa May’s government struggles to put together a proposal that will satisfy members of parliament as well as be acceptable by the European Union.

Crude prices fell on Wednesday as global growth expectations continue to decline with no signs of a China-US tariff reduction. President Donald Trump mentioned that trade talks are going well, but then said that if a deal is not reached tariffs could be even higher. Global energy demand has been soft as uncertainty remains in the minds of investors.

President Trump officially recognized the leader of the Venezuelan opposition as the interim president. Economic and diplomatic pressure will be applied if Juan Guaido is not recognized. President Maduro has retaliated by giving US diplomats in Venezuela 72 hours to exit the country.

Sanctions on oil producing countries increase the price of crude, as the market has seen after the sanctions on Iran. Earlier in the session part of the weakness in oil prices was that the EU was seeking a way to circumvent US sanctions. Venezuela exports to the United States have declined American refiners will be impacted as they scramble to find suitable replacements in the short term, driving prices of heavier grades higher.

Gold fell slightly by 0.1 percent on Wednesday. The yellow metal was sold as investors flocked to equities. Dollar weakness and No-deal Brexit headlines appreciated gold, but the move did not last as Labour threw its support of an extension of Article 50.

Geopolitical risk events have kept gold in a tight but volatile range. Today investors favoured yield over safety as equity markets shrugged off global growth slowdown fears, the sentiment is subject to change as the ECB publishes its monetary policy statement and President Draghi addresses the financial press.

Strong earnings from IBM and Procter & Gamble guided US stock markets higher. Equities followed blue chip performance despite a gloomy growth outlook as the US and China remain far apart in their upcoming trade talks. The partial shutdown of the US government continues and the White House Economic adviser said on Wednesday that it could bring down the quarterly growth to zero.

The European Central Bank (ECB) is not expected to make any changes to its monetary policy on Thursday, but all eyes will be on President Mario Draghi. A dovish outlook could come up during the press conference and spark a sell off if the view is more pessimistic than usual.