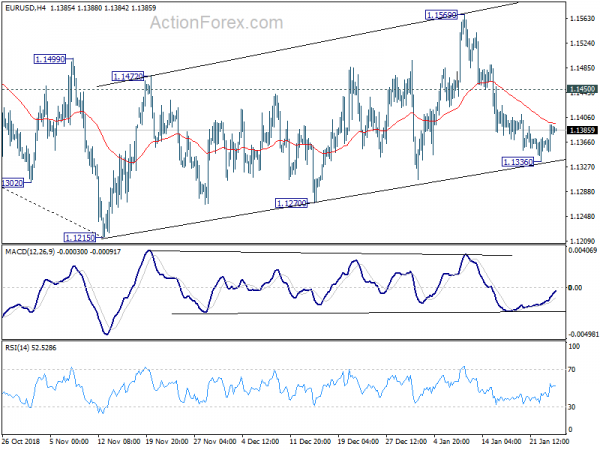 European majors are trading generally higher today as Eurozone will take the center of stage. There are worries of deeper and longer than expected slowdown in the Eurozone economy. PMIs from Germany, France and Eurozone will provide some hints on economic performance at the start of the year. ECB rate decision will for sure be the focus too. In particular, the tone of the post-meeting press conference will likely turn more cautious, if not dovish. Hence, while Euro is recovering, there is risk of renewed selling ahead, which might also drag down the Swiss Franc and, to a lesser extent, Sterling.

On the other hand, commodity currencies are generally lower despite lack of risk aversion in the markets. Australian Dollar turns south after mixed job data, strong in the headline by questionable in the details. New Zealand Dollar is paring some CPI prompted gains. Meanwhile, Canadian Dollar weakens as oil recovery lost momentum.

Technically, AUD/USD’s break of 0.7116 minor support today suggests that the rebound from flash crash low at 0.6722 has completed at 0.7235 already. More downside is now in favor in AUD/USD to retest 0.6722 low. Sterling’s rallies against Dollar, Euro and Yen are in progress, still with firm intraday momentum. EUR/USD is in recovery while USD/CHF is in retreat. But there is no change in near term outlook. That is, more upside is in favor in Dollar against Euro and Franc.

ECB to turn cautious but no change in forward guidance yet

ECB rate decision and press conference is a main focus for today. No change is expected in monetary policy. And the main refinancing rate will be held at 0.00%. As recent economic data pointed to further weakness in the Eurozone economy, ECB president Mario Draghi might turn a bit more cautious or even dovish in the press conference.

Market has already pushed back their expectations on the first rate hike to mid-2020. But, ECB is still unlikely to make any change to the forward guidance. That is, ECB will reiterate that interest rates will stay at present level at least through summer of 2019. ECB probably would wait for more incoming data before making such a change.

Here are some suggested previews on ECB:

BoE Haldane: People to take finger of pause button, if some Brexit deal is done

BoE Chief Economist Andy Haldane said in a newspaper interview that “if the economy continues to tick along, as we expect, then we might expect some further limited and gradual rises”.

In particular, if some Brexit deal is done, “that would reduce uncertainty and, we think, cause people to take their finger of the pause button and do a bit more investment spending”.

And if the economy begins to “change direction, “we will be flexible in the face of that.”

EU chief Brexit negotiator Michel Barnier said yesterday that no-deal Brexit is now the default, and “Preparing for a no-deal scenario is more important now than ever, even though I still hope that we can avoid this scenario.”

He also warned that “Opposing no-deal will not stop no-deal from happening at the end of March. To stop no-deal, another majority will have to emerge.” And he added, “This is the objective of the political consultations that Theresa May has started and we hope, sincerely, we hope that this process will be successful”.

Meanwhile, he also pointed out there are two possible ways to leave the EU. “Number one, an orderly withdrawal based on the agreement that we have built step by step with the UK over the last 18 months.” Or, “Number two, a disorderly withdrawal, leaving the EU without a deal, is a default scenario and there appears to be a majority in the House of Commons to oppose a no-deal.”

BoC Poloz: Timing of next rate hike depends on how the economy responds to the shocks

BoC Governor Stephen Poloz reiterated that more rate hikes are warranted for the central bank. But the timing would be “data dependent” and “it will depend on how the economy responds to the shocks we’ve described.” He referred to developments including Canada’s housing market, trade tensions and import of lower oil prices.

In particular, Poloz noted the past increase interest rates could lead to slumping activity. And the housing markets hasn’t “quite settled down”. He would like to see how the markets stabilize to know “where we stand”. That’s a sign taken then BoC could opt for a pause for a while.

But Poloz also defended past rate hikes of BoC and some other central banks. He noted “we are at a stage in the cycle where it always looks like monetary policy is doing the wrong thing”. And, given the economy is “near its steady state, interest rates also should be near their steady state.” But Poloz emphasized that the actual level of the so called steady state, or neutral rate, is an “open question”. BoC estimates it to be 2.5-3.5%.

White House economic adviser Kevin Hassett said yesterday he’s confidence that US and China will reach a trade deal by March 1 deadline. He said in a CNN interview that “Yes, I am confident that it can happen, that the talks are moving forward”.

And, “There’s a lot of progress to be